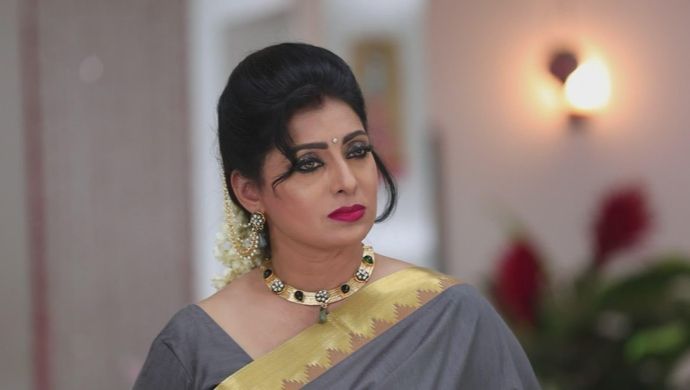 In the last episode, we saw Akhilandeshwari meeting an old friend, Charu, who also happens to be a psychiatrist. Akhila confides in Charu that she gets a strong feeling that Adithya spoke to her about something important when she was lying unconscious in the hospital but she cannot be sure. She says that though she keeps hearing his voice and it is mentally disturbing her, she is not sure if Adi actually spoke to her. Purushotam also tells her that Adi did not speak to her in the hospital but she has her doubts. He immediately seeks help from Arun and Aishwarya after Charu decides to start a procedure that will help Akhila remember what happened. Akhila remembers that Adi told her a deep dark secret and that’s when the other three family members enter the room to try and stop the procedure.

Akhila remembers that Adi apologised to her for hiding the truth about something. Just then, Arun smashes a vase nearby to interrupt the session. He immediately distracts her with a work problem while Charu stands there upset with the whole disturbance. Akhila asks Charu to continue the session but she asks her to take rest. She also adds that they cannot confirm if what Akhila remembers really happened or not. Charu prescribes some medicines and leaves.

Aishwarya tells Parvathy everything that happened, leaving her worried. They leave their room and see a worried Purushotam sitting in the living room. Aishwarya tells him that she has confided in Parvathy about everything. Parvathy tells him that Adithya had indeed confessed the truth about them to Akhila when she was in the hospital. Purushotam tells them that Adithya is also guilty of hiding his secret love marriage from his mother, whom he adores a lot. He also asks Parvathy to not tell Adi about anything that happened in the house today. He assures them that everything happens for a good cause.

They are shocked to see Akhila standing by the door and listening to their conversation with a stern look on her face. They are, however, relieved to know that she did not listen to the entire conversation. Purushotam spins a lie to drive the suspicion away. Akhila gets a work call and gets distracted. The others also leave the room while she is busy on the call. However, she doesn’t believe anything that Purushotam told her and decides to find out what everyone is hiding from her.

Vanaja and Mithra tell Nandini that Adi told Akhila everything about his secret marriage while she was unconscious in the hospital. Nandini asks Vanaja to tell Akhila everything but Vanaja says that Akhila won’t believe her thinking she is just saying it out of hatred for Parvathy. Vanaja tells them that they will wait for the right time and then reveal the truth.

In the house, Akhila asks everyone to be present in the living room. She tells everyone that it is Pournami tomorrow and it is the day when they are supposed to take out a Spatika-lingam from the well. She tells them that Mithra and Aishwarya will have to dive into the well and take the lingam out. She tells them that Guruji has ordered her to do so. It will be the daughters-in-law of the house who will have to do it, whoever manages to do it will be deemed fit for the puja. She also asks men to not be a part of the puja and none of them can accompany the ladies to the temple. Having made the announcement, she leaves the living room.

Aishwarya then tells Purushotam that Parvathy is the only one fit to retrieve the lingam and they leave everything up to fate. For more such entertainment, watch Iniya Iru Malargal, the story of two sisters Pragya and Bulbul streaming on ZEE5.

Sembaruthi 10 October 2019 Preview: Akhila Has A Tough Task For Her Daughters-In-Law

#FunFriday: Here Are Our Top Three Funniest Characters On Television