When Aishwarya sees Parvathy doing all the household chores, she brings a glass of juice for her. Parvathy is happy to be showered with love. 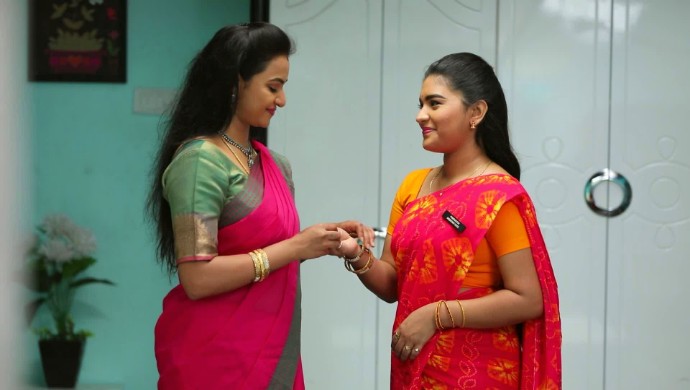 In today’s episode of Sembaruthi, Akhilandeshwari proves that she is a woman of substance. No wonder why she is hailed and respected by thousands of people! Today, when she sees goons surrounding Nandhini, she saves her arch rival by shooting them in the hand and leg. She says that her enmity is with Nandhini, who hails from the family of the Naagpuri Vamsam but she genuinely cares for people who work with her. She also proves that people who try to be in Nandhini’s good books are not her well-wishers in the truest sense. Though Nandhini thanks Akhilandeshwari  for saving her from the goons, she gets annoyed with her remarks.

Meanwhile, at the mansion, Adithya and Parvathy have a lengthy conversation regarding the special moments in their life. Adithya writes in his diary when Parvathy asks him why he does so. He tells her that his diary helps him maintain a record of all the important events in his life. He feels that one must write a diary to express their thoughts but Parvathy opines differently. She says that her heart and mind do the job of a diary for her. And to test her memory, Adithya asks her a few questions and Parvathy answers them correctly. After spending some quality time with Adithya, Parvathy heads to the Puja room for the routine cleaning work. When Aishwarya sees Parvathy doing all the household chores, she brings a glass of juice for her. Parvathy feels awkward to see Aishwarya taking care of her but the latter says that she must not feel inferior. Aishwarya tells Parvathy to exercise her rights and address her as Aishwarya instead of Aishwarya Amma.

Initially, Parvathy refuses to take Aishwarya’s name but when the latter convinces her, she agrees on the condition that she will continue to call her Aishwarya Amma in the presence of Mithra, Vanaja, Uma and other family members. Parvathy is happy to be showered with love, and hopes that she gets an approval from Akhilandeshwari soon. Keep watching Sembaruthi and for more entertainment, watch Rettai Roja, a story of identical twin sisters Anu and Abi, on ZEE5.