As per the terms of his bet with his son, Sundaram hangs up family portrait in the outhouse, with Adithya also in it. Will this bode trouble for him? 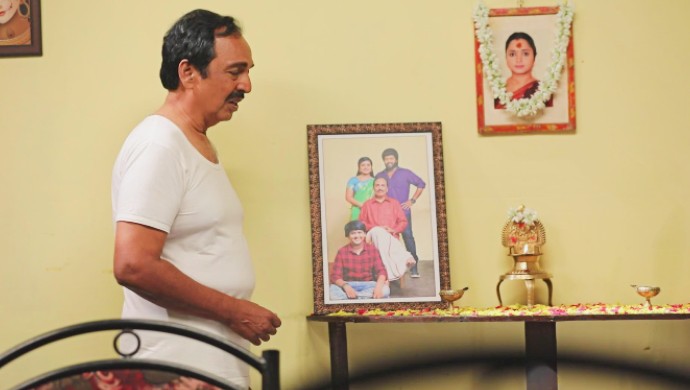 In the previous episode, we saw that Arun plays a prank on Mithra by secretly calling her phone and then announcing loudly in front of everybody that she is getting a call from Nandini. Her frightened reaction makes Akhila suspect that Mithra might be related to Nagapuram vamsam, same as Nandini. On the pretext of helping Mithra wear a new necklace that she gives her, Akhila checks if the tattoo on Mithra’s back is that of a snake. We then find out that Mithra had actually gotten her snake tattoo removed and replaced it with a lion, leaving Akhila none the wiser and unsuspecting. Meanwhile, Ganesh complains to Adithya in the outhouse that his father was not honouring the terms of the bet he lost pertaining to Parvathy’s election. This meant that Sundaram would have to hang up a new family photo on the wall, with Adithya in it. Adithya agrees to it and calls for a photographer.

In tonight’s episode, we see Sundaram hanging up a family photo next to his wife’s photo. This new photo includes Adithya too. It’s a bitter sweet moment for Sundaram as he tells his wife that he wished she were a part of the photo too. However, there is tension in the air too. Such a bold move on part of Sundaram surely gives rise to the speculation that what if Akhila sees the photograph. Will she react in anger? So far, all of Akhila’s reactions to changes surrounding Parvathy have been unexpected. To find out, watch Sembaruthi tonight on ZEE5.

Yaaradi Nee Mohini 11 December Preview: Why Is Vennila Hiding From Her Husband Mutharasan?

Sembaruthi 11 December Written Update: Akhila Is Accused Of Having Soft Spot For Mithra