Sembaruthi 11 December Written Update: Akhila Is Accused Of Having Soft Spot For Mithra

Purushothaman accuses his wife of having a soft spot for Mithra. He tells her that Akhila forgives Mithra's mistakes only because of her jadagam. 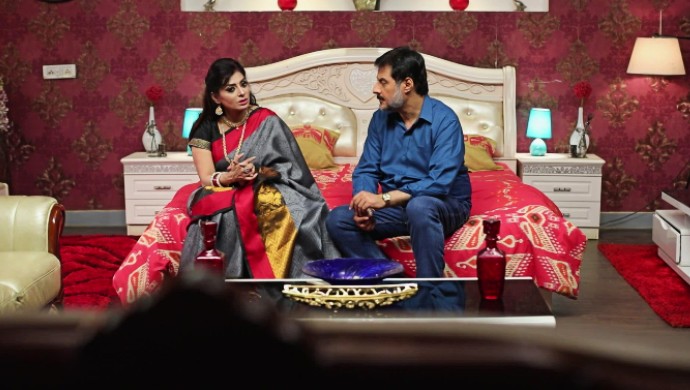 In the previous episode, we saw that Arun plays a prank on Mithra by secretly calling her phone and then announcing loudly in front of everybody that she is getting a call from Nandini. Her frightened reaction makes Akhila suspect that Mithra might be related to Nagapuram vamsam, same as Nandini. On the pretext of helping Mithra wear a new necklace that she gives her, Akhila checks if the tattoo on Mithra’s back is that of a snake. We then find out that Mithra had actually gotten her snake tattoo removed and replaced it with a lion, leaving Akhila none the wiser and unsuspecting. Meanwhile, Ganesh complains to Adithya in the outhouse that his father was not honouring the terms of the bet he lost pertaining to Parvathy’s election. This meant that Sundaram would have to hang up a new family photo on the wall, with Adithya in it. Adithya agrees to it and calls for a photographer.

Tonight’s episode opens with Adithya agreeing to pose for the family photo. He calls a photographer home and photos are taken. He then specifically instructs the photographer to not leave these photos lying around or retain copies. In the next scene, Akhila and Purushothaman are talking in their bedroom. Akhila narrates how she suspected Mithra to be related to Nandini and tested her suspicions by secretly checking for the tattoo on Mithra’s back. However, Purushothaman tells her that she is disregarding Mithra as a suspect too soon. He points out that given that Nandini’s secret was discovered because of her snake tattoo, is it not possible that Mithra would have taken steps to have her tattoo removed if she did possess one? Additionally, he outlines all the dishonest things that Mithra has done in the past, which Akhila had either forgiven or accepted her excuse. Purushothaman tells Akhila that she would not tolerate the same from anybody else and is only favouring Mithra because of her jadagam.

Meanwhile, Ganesh happily unpacks the new family photo, but Sundaram erupts at him, asking him to put the photograph away. He tells his children that he is constant fear of it being discovered. When Ganesh insists, he starts hitting his son. Then Sundaram tells his daughter that he can no longer hit her because she is now the boss’s wife, which means her is her servant. Besides, Parvathy now holds a big position in the company, so she is no longer in the same league as her family anymore. His words hurt Parvathy, who starts crying. Later at night, Ganesh wakes up suddenly and goes into the living room to see his father hanging the photo next to his dead wife’s photo and telling her that he feels bad that she is not in the photo.

For more such entertainment and drama, watch Poove Poochoodava, now streaming on ZEE5.