Nandini decides to gatecrash Adi and Mithra’s wedding. She also meets Akhila and challenges that the wedding will be stopped. 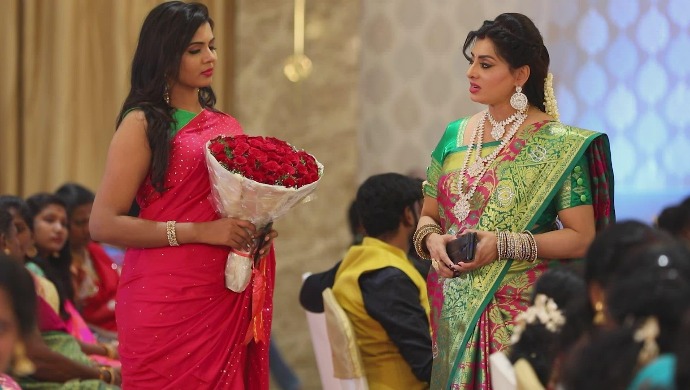 In the previous episode, Mithra and Vanaja are freaking out about her fake parents, when they finally manage to arrive at the function. Akhila also greets them but is very snarky towards them. She asks them why someone else’s marriage is so important that they have come for their own daughter’s wedding as guests. Before they can answer, Vanaja distracts Akhila by pointing towards Guruji. Later, Vanaja shows concern over why the cops let Mithra’s fake parents go away, just before the wedding. When Adi fails to arrive at the mandapam, she gives Purushottaman a call.

Tonight, Akhila tries to reach Purushottaman but is unable to, as he doesn’t pick up the call. But since she continues to bombard him with phone calls, he eventually answers her cell phone. Akhila lashes out at him and states how he is supposed to bring Adi to the wedding hall as soon as possible and not let him attend ISD calls at the moment. Vanaja stands next to Akhila as she wants to hear what is happening. Purushottaman then brings the wedding attire to Adi and asks him to change so that they can head to the kalyana mandapam.

However, Adi gets upset with his father for trying to pull off such a stunt. He states that he heard Purushottaman speaking to Akhila and how Adi’s decision of avoiding the mandapam is not going to change. His father tries to explain that Akhila will not be happy with what happens. But Adi states that he wants to speak to her in private and break the news instead of letting her face public humiliation. Adi also adds how Akhila has been dodging speaking to him to avoid the subject of Parvathy. Upset with whatever is happening around him, Adi leaves the house and goes to Parvathy’s place to meet her.

Meanwhile, Mithra calls up Nandini and asks her where she is. Nandini responds saying that she is close to the kalyana mandapam and will be attending Mithra and Adi’s wedding. Mithra is a little excited but asks if she has disguised herself like last time. However, Nandini turns up without hiding her face or personality and walks into the hall. Akhila notices her and walks up to her while Vanaja is worried about Nandini’s presence at the wedding hall.

Akhila and Nandini exchange dialogue about how she will try to stop the wedding again. She states that no matter what happens, Adi and Mithra’s wedding won’t take place. But Akhila is unfazed by the challenge and states that Nandini has never won and won’t win this time too. Arun asks Nandini to leave the wedding hall but Akhila states that if she wants, she can stay as her presence won’t change anything. Nandini decides to stay and watch the drama while Akhila and the others disperse to fulfill their wedding duties.

Preview of the next episode: Akhila gives Sundaram a call and asks him about Parvathy. She is upset that the family hasn’t arrived yet for the wedding even when the groom’s family is in the hall and waiting for them. Akhila then brings up the subject of how she feels he doesn’t respect or trust her anymore and is boycotting her by not showing up. Sundaram is hurt by Akhila’s words as they point towards his loyalty. What will he do? Will he drag Parvathy to the wedding mandapam? Stay tuned!

Vikram and Nayanthara's Action-Packed Iru Mugan Should Be Your Next Movie To Binge-Watch!