Vanaja breaks the news of Adi and Mithra’s wedding to Sundaram to invoke a reaction out of him. However, he remains calm. Why? 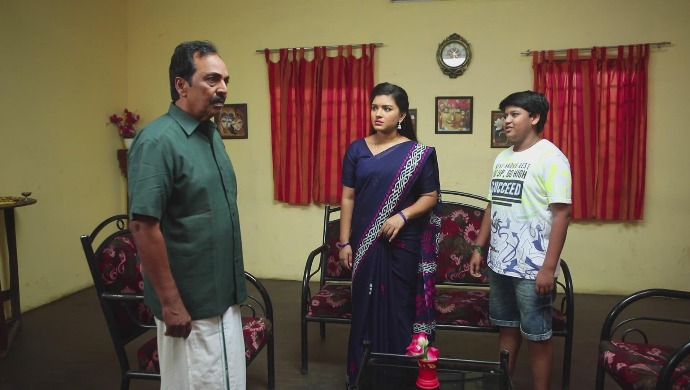 In the previous episode, Sundaram is brought back home with Adi’s help. He informs Adi that Vanaja probably knows about his marriage with Parvathy. Sundaram also expresses how he fears the consequences of Akhila’s rage over this secret. However, Adi consoles him and tells him that he will protect Parvathy as she is his wife. Adi reaches home and asks Parvathy for pudina tea, but soon realises that she doesn’t work as a cook anymore. Akhila decides to prepare some tea for him. Just then, Parvathy enters the room with pudina tea in a flask. Adi is in an awkward position as Akhila also arrives with his tea. He decides to keep their hearts by accepting tea from both of them.

Tonight, Akhila is hurt to see Adi accepting Parvathy’s tea too. Vanaja asks him why he has to accept Parvathy’s flask if Akhila made it for him. To this, Adi states that he is having his mother’s tea now and will have tea from the flask whenever he feels like, later in the day. With that, he shuts Vanaja up and tells her to stay out of his business. Vanaja visits Sundaram and tries to rile him up again. She mentions how people with his condition, would have had trouble regaining from the stroke. However, thanks to the doctor sent by Adi, he has managed to recover soon.

Vanaja then brings up the subject of why he got a stroke in the first place. She then suggests to avoid taking stress, as that would lead to another stroke. With that, Vanaja brings up the topic of how on Adi’s birthday, not just Parvathy but even Adi will be tying the knot with Mithra. Sundaram does not react to this news and sits still. Vanaja is shocked to see his reaction and wonders why he is not saying anything. She tries to get some reaction out of him but he just states that whatever Akhila decides, is for the best.

In a flashback, it is revealed that Sundaram walks in on Parvathy and Ganesha’s conversation. He hears how they are unsure of breaking the news to Sundaram, as it might cause him health problems again. He intervenes and asks his children to tell him what they are discussing. They are apprehensive of letting him know. However, Ganesha eventually tells him about Akhila’s decision to get Adi married to Mithra on the same day as Parvathy’s wedding with Rishi.

Parvathy fears that Sundaram might have some health concerns. However, he doesn’t react and states that nothing surprises him anymore. Vanaja informs Nandini about Sundaram’s reaction to Adi-Mithra’s wedding news. They are certain that Adi is responsible for Sundaram’s sudden confidence.

How Does Vicky's Life Turn Chaotic After He Consumes A Therapy Pill? Watch Enakkul Oruvan