To stop the entry of the wrong girl (Mithra) in Adi's life, Purushothaman tells Akhilandeshwari that he thinks their son must get married to Parvathy. 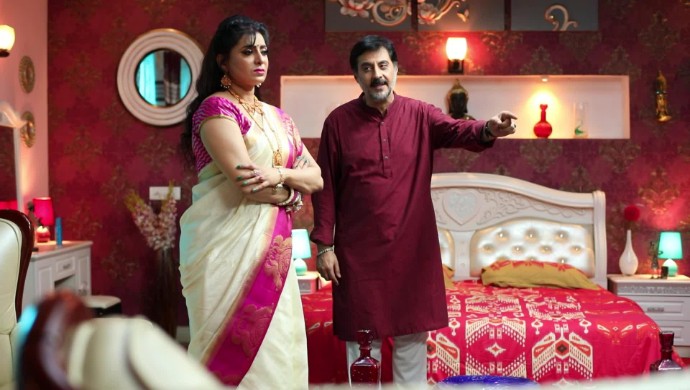 Purushothaman is back home after getting discharged from the hospital. He suffered a heart attack before revealing the truth about Mithra and her dirty games. Now that he is back, he decides to make the most of his birthday by talking to Akhilandeshwari about Adithya and Parvathy’s relationship. Will he tell Akhilandeshwari why he feels Parvathy is ideal for Adithya in today’s episode of Sembaruthi?

For the unversed, the Vanaja, who knew about Purushothaman’s plan, hatches a counter plan to stop him from discussing Adithya-Parvathy’s relationship with his wife. So she convinces Akhilandeshwari to give her consent to Mithra to perform the Munnorgal Puja for getting the blessings of the Adhikadavur ancestors.

Akhilandeshwari agrees to let Mithra do it, but Adithya isn’t happy about it. He wants Parvathy to perform the puja and is confident that she will succeed in getting their blessings and acceptance. The Sphatiga Mala kept in the temple room turns black after Mithra reluctantly performs the Puja while Parvathy, who secretly worshipped in Adithya’s bedroom, gets blessed by the Adhikadavurs. Her Sphatiga Mala remains as it is. Vanaja, who sees Parvathy performing the Munnorgal Puja, replaces the Sphatiga Malas. Thus she saves Mithra.

And if you like watching supernatural shows, watch Yaaradi Nee Mohini on ZEE5.