Uma wanders around Adi's room waiting for him to leave. And when she sees that he has left the house she quietly slips into his room. 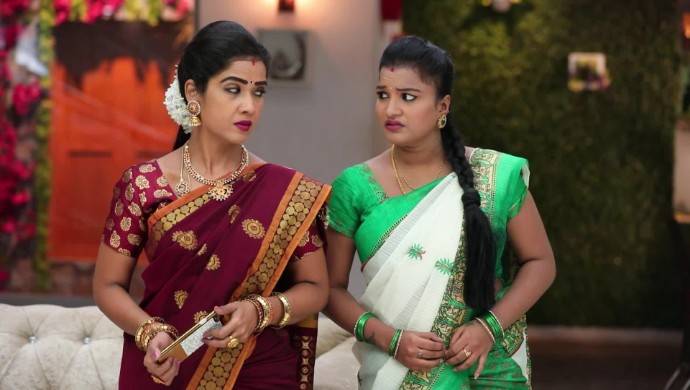 In the last episode of Sembaruthi, we saw that Arun is worried for the registration paper of Adi and Parvathy’s marriage slips and falls near Aishwarya. While he thinks as to how to take that paper away before she sees it, Aishwarya notices that paper and bends down to pick it up. In his desperation to save the situation, Arun drops the milk glass that he is holding and it falls down and breaks. Using this distraction to his benefit he slyly takes the paper away. Later, while Adi and Parvathy visit the temple they see Akhilandeshwari already standing there. They happen to see that Akhilandeshwari is worried and she expresses her fears to the temple priest. After that, she sits down and is seen crying, this affects both Adithya and Parvathy.

In today’s episode, we would see that Vanaja, Mithra and Uma have again gathered to plot against Adithya and Parvathy. But this time it seems that they are looking out for some evidence which apparently they can use against Adi and Parvathy. So, they ask Uma to slyly sneak into Adi’s bedroom and look for some substantial evidence. Uma proceeds as directed to her and she wanders around Adi’s room waiting for him to leave. And when she sees that he has left the house she quietly slips into his room.

So, what do you think will happen? Will Uma find something which she can use against Adi and Parvathy?

If you like watching drama series try catching up with the latest episode of Iniya Iru Malargal, now streaming on ZEE5.