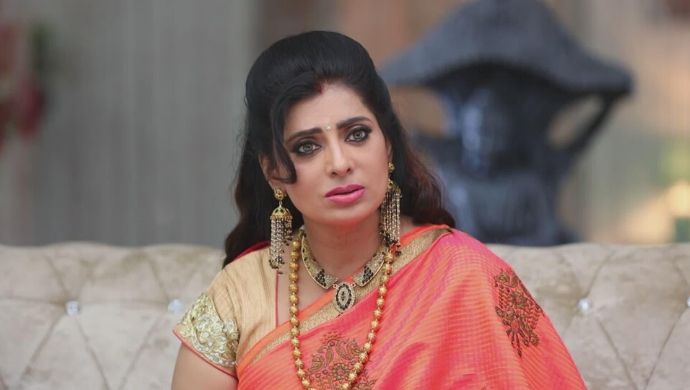 In the previous episode, Purushothaman sees how conflicted and worried Akhilandeshwari is over the incidents that occurred at the Chandra darshan puja. In fact, she even ends up hurting herself as she starts breaking things out of frustration. Adithya decides to take help from Guruji and prove to Akhila that Parvathy is right for the family, step by step.

Adithya and Purushothaman visit Guruji asking him for his help. Guruji agrees and says that all of this is the spatika lingam’s doing. He tells them that he will visit their house with a plan the next day. At night, Adithya and Parvathy meet in the garden where he tells her everything. Sundaram walks in and asks them to not be seen together since Akhila might lose her cool if she sees them together.

In the morning, Akhila is sitting in the living room worried and pondering over everything. Just then Guruji walks in and she confides her insecurities in him. He then drops a bomb by saying that Mithra never got the blessings of the ancestors and it was always Parvathy.

Akhila refuses to believe it and Guruji decides to prove it. He asks Mithra to light a diya that has been placed right in front of the portrait of Adikadavur ancestors and tells her that if the diya doesn’t light in three attempts, it means the ancestors are not happy with her becoming a part of the family.

An overconfident Mithra fails all three attempts and then goes and stands in a corner dejected. Guruji then asks for another Diya with water in it instead of oil. He also asks Parvathy to come forward and Akhila asks him why he wants Parvathy to do the ritual. Guruji asks to be patient. Parvathy hesitantly walks towards the diya as Guruji asks her to pray to the ancestors and hope she succeeds. Parvathy prays and remembers what the thatha at the temple told her before lighting the diya. Whether she successfully lights the diya or not, we’ll see in tomorrow’s episode.

Sembaruthi 11 November 2019 Preview: Guruji To Prove That Parvathy Is The Chosen One