Parvathy's first meeting with Akhila as a goodwill ambassador doesn't go as she expected. 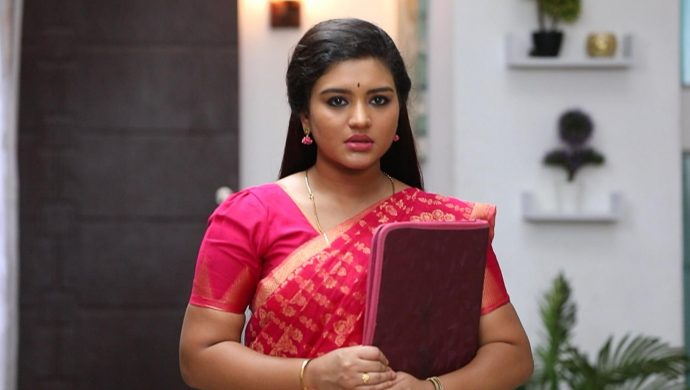 In the previous episode, we saw Adithya posing for the family photo. Akhila tells Purushothaman about how she secretly checked Mithra’s back for a snake tattoo to investigate her connections to Nandini’s family and that her fears proved unfounded. However, Purushothaman points out that Mithra may have removed it since it exposed Nandini. He also outlines all the dishonest things that Mithra has done in the past and tells Akhila that she is favouring Mithra despite knowing everything only because of her jadagam. Meanwhile, Sundaram, angered by his children’s insistence to hang the family portrait with Adithya on the wall lashes out at them and tells Parvathy that she is no longer his daughter, but his boss.

Tonight’s episode opens with Sundaram talking to his wife’s photo and fondly recalling the time she made him take a photograph. He feels bad for having hurt his children. Later, Parvathy gets visitors from the company’s marketing team. They request her to get the company to arrange a party for them due to achieving much above the set target. They also add that while other companies have it, this company doesn’t.

Parvathy seeks out Akhilandeshwari for this. Adithya has gone out of town.  The meeting starts uncomfortably with Parvathy preferring to stand and Akhila commanding that she sit on the sofa since she is no longer a servant.

Parvathy brings up the issue and Akhilandeshwari asks her about her solution for it. Parvathy squirms uncomfortably in her seat and says that she was hoping to pass on Akhila’s response to the marketing team. Akhila then reprimands Parvathy saying that she is not a messenger, but a Goodwill ambassador and should have her own understanding of the situation.

She then goes on to add that marketing team never achieves alone on its own and is always supported by other teams including production and executive. Therefore it would be wrong to throw a party since it creates unnecessary discord amidst teams. She also points out that these things are too trivial to be placed in front of top management. She finally concludes by saying that she will forgive Parvathy this one time.

All though Parvathy stays silent, realising she has failed miserably her first time.

Sathya 13 December Preview: Prabhu Tells Sathya That Being Married To Her Feels Like Hell