Akhila calls Sundaram and threatens to kill herself if he doesn’t come to the mandapam with Parvathy. But she refuses to leave the house. 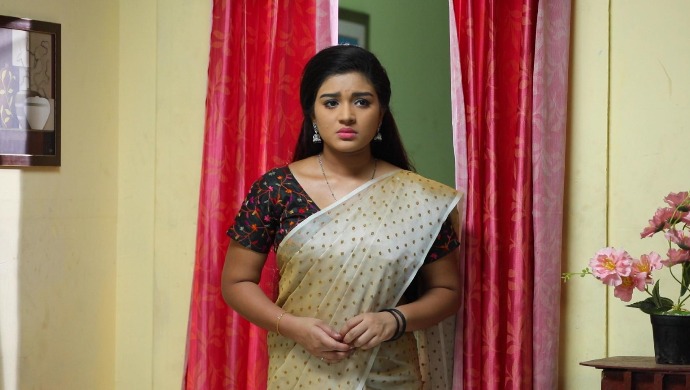 In the previous episode, Akhila is furious at Purushottam for not bringing Adi to the wedding mandapam. Unable to make a choice, Purushottam heads to Adi with his wedding clothes and asks him to change. But Adi refuses to do anything of the sort. He then states how if Akhila can be adamant about not listening to him then he too, will not budge. Nandini arrives at the wedding and challenges Akhila, saying that she will try to stop the wedding at all costs. She uses reverse psychology to make sure that Akhila will get Adi and Mithra married, by hook or crook.

Tonight, Vanaja realises that Nandini has smartly used reverse psychology to irk Akhila and make sure that Adi and Mithra’s wedding takes place. Vadivel also attends the wedding and notices Nandini taking the first row in the hall. He decides to sit next to her and tells her that she should forget the idea of getting her sister Mithra married into the Adikadavur family. Vadivel also addresses the day when Nandini held him at gunpoint and states that he is not afraid of her anymore.

Rishi’s parents throw a fit about the mandapam being ready for only one bride and groom. They ask the hall owners to create another one for their son. Rishi tries to pacify them but they don’t listen and notice Arun. They take the matter up to him and ask Arun to speak to the hall officials and get a new mandapam ready for Rishi. However, Arun lashes out at them and says that only after Adi and Mithra’s wedding will Rishi and Parvathy’s ceremony take place. Hence, there is no requirement for a second mandapam. But his parents decide to take the issue to Akhila with the hopes of getting it done.

Akhila hears the whole scene and is furious at them. She states that Arun is right and that they are wasting her time by bringing such menial concerns to her. Rishi apologises on behalf of his parents and takes them away. Vanaja notices everything and decides to irk Akhila a little more. She asks her about Parvathy and how Rishi’s family might point towards the fact that the bride hasn’t arrived yet, and neither has her family. Akhila also realises the same and tries to call her. But Parvathy decides to not answer her call because she has made up her mind not go to the mandapam.

Sundaram then receives a call from Akhila and Ganesha asks him to not answer it. But after a few tries, Sundaram feels terrible and answers the call. On the phone, Akhila expresses her anger over the fact that neither the bride nor her family has arrived for the wedding. She tells Sundaram if he doesn’t bring Parvathy to the wedding mandapam then he will see her dead. Scared of consequences, Sundaram decides to take Parvathy to the mandapam but she refuses to do so.

Preview for the next episode: Parvathy has no choice but to go to the wedding mandapam. She tells Aishwarya about how miserable she feels and wishes for Adi to be there by her side. Parvathy simply wants everything to be resolved as soon as possible. Will Adi also arrive at the wedding mandapam after learning about Parvathy? Stay tuned!