Here's what's going to happen in the next episode of Sembaruthi. 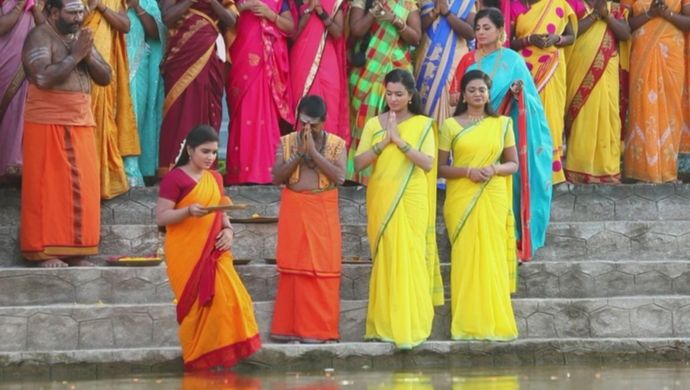 In the last episode, we saw Akhilandeshwari announcing that the daughters-in-law of the house will have to perform a certain task at the temple, that is a little dangerous but will also determine which one of them is worth it. Meanwhile, Nandini also plans to get Aishwarya killed since she wants Mithra to retrieve the spatika-lingam and also wants to seek vengeance. Vanaja sees Adithya call Parvathy to his room with tea and questions her about it later on. Just as she is about to slap Parvathy, Adithya interrupts and manages the situation while confusing Vanaja, Mithra and Uma.

Watch the previous episode of the show, in case you missed it.

In the upcoming episode of the show, Parvathy is seen in a yellow saree initiating the puja as Aishwarya and Mithra get ready to immerse themselves in the pond to retrieve the lingam. Parvathy looks at them emotionally since she is supposed to be the one next to Aishwarya and not Mithra. On the other hand, the man Nandini hires to kill Aishwarya also sneakily dives into the pond ready to kill her. Will Aishwarya be killed during the puja? Will Parvathy somehow manage to retrive the lingam instead of the other two and convince Akhila that she is right for the family? To know more, log into ZEE5 to catch the whole episode of Sembaruthi when it airs today evening.

For the ones who have missed the previous episodes of the show, Akhilandeshwari keeps hearing Adithya’s voice and recollects that he tried to confess something to her when she was in the hospital. But everybody else hides it from her since she doesn’t know about Adithya and Parvathy’s secret marriage. For more such entertainment, watch Piriyadha Varam Vendum streaming on ZEE5.