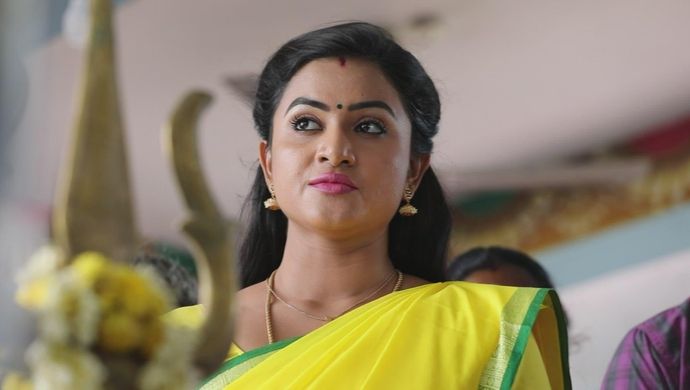 In the previous episode, Aishwarya convinces Parvathy to accompany them to the temple since she should ideally be taking a dip in the pond with her instead of Mithra. We also saw Adithya and Parvathy share some romantic moments with each other. Vanaja tries to get Parvathy to reveal the truth and is about to slap her when Adithya intervenes and saves her. His reply leaves Vanaja and gang startled and confused, both.

Adithya and Parvathy exchange loving glances before he leaves the house. Vanaja and Mithra are fuming over what happened. In the meanwhile, Uma finds the box of sweets and tells them that he also gifted Parvathy a box of sweets but they only get mad at her more. Akhilandeshwari is walking restlessly in her room and then goes to the puja room to find some peace. She writes 2 names in two chits and keeps it in front of the idol.

She is worried about who will find the spatika-lingam and asks God to help her with it. Just then, the diya that she lights goes off which surprises her. Parvathy enters the room then and lights the diya again. Akhila misses all the signals. She shuts her eyes and is about to pick one of the chits when Purushotam stops her. He tells her that she needs to be patient to which she says that ideally the older daughter-in-law of the house must find it. She then tells him why she is so restless about everything.He assures her that whatever happens will be good and meant to be.

At the temple, Vanaja spots Nandini and goes to talk to her with Mithra. Nandini tells them that the plan is in place and the person she hired is also ready, in position. Akhila is looking for Vanaja and Mithra. They make some excuse and come back. Akhila also prays to God that whoever deserves it must find the spadika-lingam. Parvathy prays that Aishwarya should win and Aishwarya prays that Parvathy deserves to retrieve the lingam and should get it. Mithra is just gloating about her plan to kill Aishwarya.

They reach the steps of the pond where the priest performs necessary puja and Parvathy volunteers to wait by the steps with a Ganpati idol made of sandalwood. She takes two steps into the pond and immerses the sandalwood idol in the water. As Aishwarya and Mithra take a dip in the pond, the killer also dives in from another end without being seen to kill one of them. Will he successfully kill Aishwarya?

For more entertainment, check out Oru Oorula Oru Rajakumari, the story of Rasathi who deals with issues of fat shaming in her village, now streaming on Zee5.

Shiva Suffers in Silence! 7 Problems That You Might Relate To If You Have Chubby Cheeks