In today's episode, the Thatha, whom Parvathy meets in the temple, cautions her that someone will learn about her secret marriage. 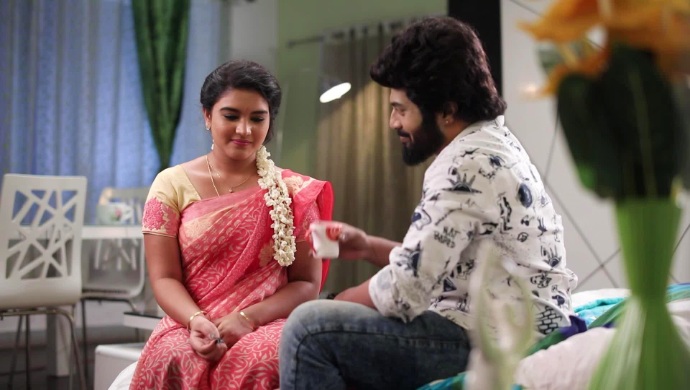 Adithya and Parvathy’s relationship has always restored people’s faith in love and matters related to the heart. The couple has proved time and again that there’s nothing stronger than unconditional love. Here’s good news for Sembaruthi fans. Parvathy is back in the outhouse and in Adithya’s life. The couple is back but they will have several challenges to face.

In today’s episode, you will see Parvathy visiting the temple that she frequents. There, she meets the Thatha, who cautions her about her secret getting revealed to someone. For the unversed, only Arun, Purushothaman, Ganesh and Shyam know about Adithya and Parvathy’s marriage. If the Thatha’s words are anything to go by, then who will learn about their secret marriage? Will it be Sundaram or Vanaja or Akhilandeshwari or Aishwarya?

Here’s a quick flashback to the story. Vanaja isn’t happy about Sundaram and Parvathy’s return because she wanted Mithra and Adithya’s marriage to take place without facing hiccups. Nandhini wants Vanaja to drag Aishwarya to her side to strengthen her team against Akhilandeshwari. However, it may take time for Vanaja to instigate Aishwarya against her best friend Parvathy.

On the one hand, Adithya and Parvathy have Vanaja, who opposes them, and on the other, Sundaram, who fears facing Akhilandeshwari’s wrath after she learns about her son’s relationship with his daughter. Poor Adithya and Parvathy, have an uphill task to convince Sundaram before they reveal the truth to Akhilandeshwari and in the meantime they will have to deal with the likes of Vanaja and Mithra.

A Lot Of Men Will Relate To Sree's Character From Pyaar Prema Kaadhal, Find Out Why!