After talking to Akhila, Sundaram freaks out and drags Parvathy to the kalyana mandapam. Ganesha rushes to Adi and tells him everything. 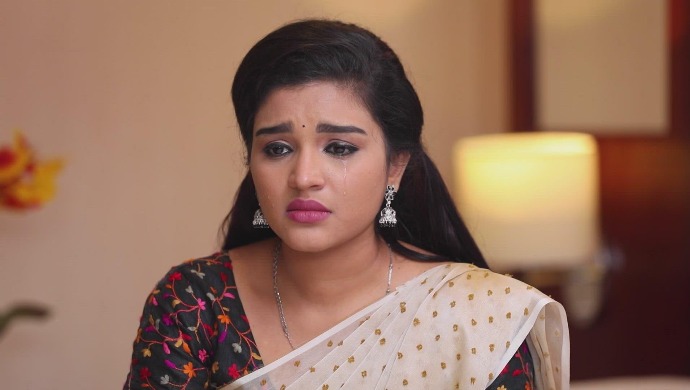 In the previous episode, Vanaja informs Akhila that Parvathy and Sundaram haven’t reached the wedding venue yet. Having realised that the bride hasn’t arrived yet, Akhila gives her a call. But she avoids Akhila’s phone calls as that would mean dealing with her. Akhila then calls Sundaram and lashes out at him. She then tells him that if he won’t reach the kalyana mandapam in the next 10 minutes then he will see her dead face.

Tonight, Parvathy steps out of her room and looks at her father. She states that she overheard his conversation with Akhila but will remain firm in her decision. Sundaram tells Parvathy that he holds Akhila in high regard in his life and he must do what his employer asks for. But she refuses to listen to him and adds that Adi means everything to her and she will do as directed by her husband. Sundaram then starts forcing Parvathy to accompany him to the kalyana mandapam. She tries her best to free herself from him but he doesn’t listen. Even when Ganesha intervenes and tries to stop Sundaram from forcing Parvathy, he pushes him and takes her away.

Ganesha then rushes to Adi’s place to inform him about what has happened. Purushottam is unable to comprehend what Ganesha wants to say as the latter is choking back his tears. Adi asks him to calm himself down and tell him everything. He then reveals how Akhila called Sundaram and told him to leave everything and arrive at the wedding hall or face consequences. As Parvathy and Sundaram reach the wedding hall, she refuses to listen to Sundaram. He tells her to behave as he doesn’t want the world to know about what’s happening. They meet Arun and Aishwarya and Parvathy explains what happened and why she was forced to come to the wedding hall.

Vanaja and Akhila also notice Sundaram and Parvathy. Akhila lashes out at both of them and tells Aishwarya to help Parvathy change into her wedding outfit as the time for the muhurtham is passing by. Meanwhile, Adi leaves from his room and decides to go to the kalyana mandapam as the only way to save Parvathy from this conundrum is by going there himself.

Preview of the next episode: Adi is seen walking out of the house along with Ganesha and Purushottam. However, he hasn’t worn the wedding attire chosen by Akhila. What does he plan to do? Will he finally reveal the truth about his marriage with Parvathy in front of everyone? Stay tuned!

Will Divya Inform Her Mother About Sathya’s Accident?

What Does The Spirit Of Queen Bhaagamathie Want From Chanchala?