Akhila notices Parvathy and Ganesha discussing her photo with Adi. Will she get to see what’s in the picture? 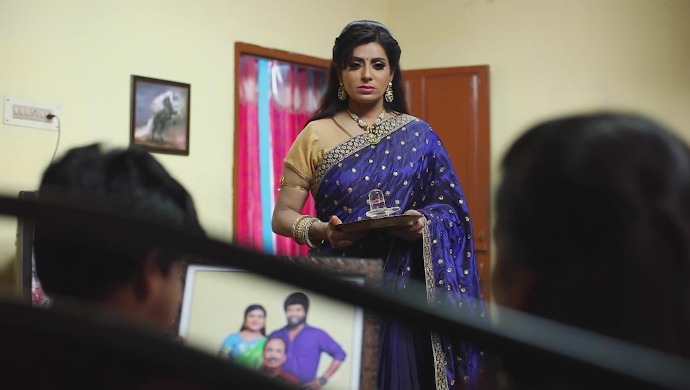 In the previous episode, Vanaja visits Sundaram as she wants to get the truth about Parvathy and Adi from him. She tries to shock him by informing him of Adi and Mithra’s wedding date colliding with Parvathy and Rishi’s. Further, Vanaja also adds that the announcement has been made by Akhila. She expects Sundaram to probably get another stroke or react in panic. However, he maintains a stoic silence and simply states that whatever Akhila decides must be for the good. It is later revealed in a flashback that Parvathy and Ganesha divulged the information concerning Adi and Mithra’s wedding to Sundaram.

Tonight, Vanaja is sitting in the living room when Vadivel enters. He tells her about the conversation he had with the priest and how he can find the woman of his dreams. Vanaja wonders how he will be able to find the girl he loves with the help of a thread. Just then Mithra is descending from the stairs. They all look at each other and are lost in thoughts. Mithra hopes to not touch Vadivel, he hopes to not care about her presence and Mithra hopes that Vadivel doesn’t realise that Mithra is the girl of his dreams. However, Vadivel realises that Mithra is the mystery woman.

Vanaja realises that probably Mithra is the one and asks him about the same. He starts crying and rushes to the priest while Vanaja is just relieved that Vadivel won’t pursue Mithra anymore. Adi speaks to Deepak’s associate and asks him to find proof of Mithra and Nandini’s relationship before his birthday. Adi also reveals an idea that he thinks would be perfect to prove that Nandini and Mithra are sisters. Akhila enters her house’s temple and notices the lingam that rightfully belongs to Parvathy.

Since it is not hers, Akhila decides to take the lingam to Parvathy. At home, Ganesha is praising the portrait picture and how stylish Adi looks in it. Parvathy also states how Adi is quite handsome and has immense panache. They continue to discuss the picture when Akhila arrives with the lingam. Ganesha immediately keeps the photo frame aside. Parvathy asks her why she has come down instead of asking for her. To this, Akhila tells her that she got the lingam for her as it rightfully belongs to her. She asks Parvathy to accept it but in a mean way.

Parvathy feels bad but accepts the lingam from her. Before leaving, Akhila turns and notices the photo frame. She asks them about it and Parvathy tells her that it’s just a family photo. Akhila asks to see it since it is. after all, just a family picture. Just when Akhila is about to see the photo, Sundaram screams for help. Immediately, they all rush to see Sundaram fallen from his bed and help him. Akhila asks Parvathy to take care of Sundaram and leaves the room. Later, Sundaram reveals that he fell down on purpose to distract Akhila from the photo.

Laxmi’s Pearls Of Wisdom Will Inspire You To Be Happy, Discover Your…

Kajal Aggarwal Is Floating Towards The New Year As She Vacations In The Tropics!

Has Vetri Framed His Twin Brother Maaran For The Murder Of A Fellow Doctor?