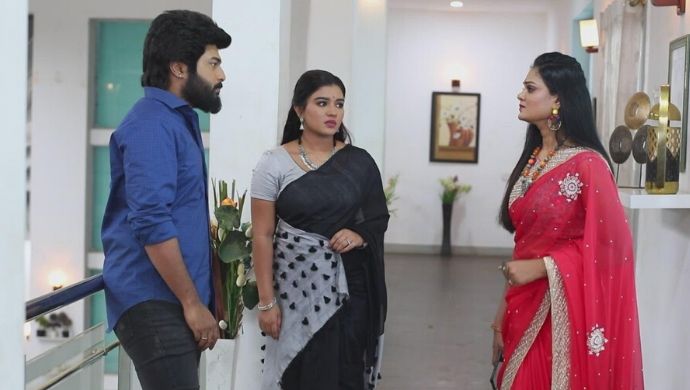 In the previous episode, Mithra’s lies are exposed in front of the entire family. Akhilandeshwari slaps her for trying to fool her. Mithra turns the game around by breaking down and accepting all of her mistakes. She also tells her that she did everything out of love for Adithya. Akhila melts on hearing this. Later on, Parvathy and Adithya catch Mithra stealing a saree from his wardrobe that was meant for Parvathy. Adithya asks Parvathy to wear the saree and show Mithra how beautiful she looks in it. Parvathy obliges.

Meanwhile, Vanaja learns how to use hypnotherapy through Google. When Mithra finishes her rant about Adithya and Parvathy, Vanaja asks her to sit so she can try it on her first. She successfully manages to hypnotise Mithra but is infuriated when Mithra confesses that she is in love with Adithya. Mithra apologises when Vanaja scolds her. With a first successful attempt, Vanaja decides to use it on Akihlandeshwari.

She goes to Akhila’s room and tries it on her. When she is convinced that Akhila is in her trance mode, she asks Akhila if she is planning on giving Vanaja a share in the property. Akhila says that she is thinking of giving her some share and Vanaja starts dancing. She doesn’t realise that Akhila is acting and starts celebrating. Akhila then gets up and scolds her. She even mocks her for thinking that Akhila will ever share her feelings with her.

Children's Day Special: Try Out These Special Recipes For Your Little Ones Today