The Guruji explains to his shishya that he cannot tell the truth directly to Akhilandeshwari. Hence, he says has chalked out a unique plan. 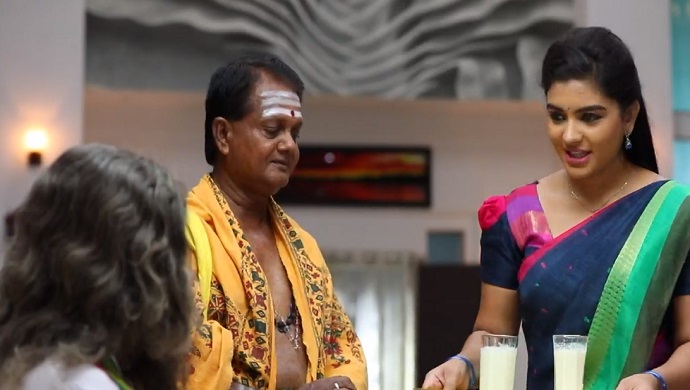 In today’s episode of Sembaruthi, the unexpected happens. The Guruji, who had asked Akhilandeshwari to send Parvathy away from her home, reveals to his Shishya that he knows the truth. He knows that Parvathy is Adithya’s wife, and sooner or later, Akhilandeshwari will have to come to terms with it. To know how the episode unfolded, read on.

The episode opens with the scene between Aishwarya and Parvathy that concluded last evening’s episode. Vanaja fumes with rage after seeing the blossoming bond between Aishwarya and Parvathy. She wonders why is Aishwarya pampering Parvathy by showering her with gifts. Next morning, the Guruji pays a surprise visit along with his shishya to Akhilandeshwari’s mansion. On seeing them arrive, Parvathy offers them glasses of milk, but they politely refuse to have it. Akhilandeshwari fears that the Guruji may get miffed with her for not following his instructions. But the opposite happens. He blesses Parvathy and then asks Akhilandeshwari to take him to the Puja room. He performs a Puja and when Akhilandeshwari leaves the room to attend a call, he reveals that Parvathy is the elder daughter-in-law of the house. He says that he cannot directly tell the truth to Akhilandeshwari. Hence he reveals to his shishya that he has chalked out a unique plan to make her accept reality as it is.

He gives her a Spatika Linga that he found in Badrinath while doing tapasya in intense cold weather. He hands in over to Akhilandeshwari and asks her to give it to the most-deserving daughter-in-law. Thus, he stops her from giving it to Mithra. Later, he tells her about the test that she has to conduct to find out who is the most deserving one. He asks her to put the Spatika Linga in the Adhikadavur village temple pond for eleven days. He explains that on the full moon day, the two daughter-in-laws must dive into the pond, and whoever finds the Spatika Linga, will become the rightful treasurer of the divine Linga.

Later, after the Guruji leaves, Akhilandeshwari shows the Spatika Linga to all the family members but doesn’t disclose anything about the test. To know how Parvathy will end up getting the Spatika Linga, keep watching Sembaruthi, and for more entertainment, watch Nachiyarpuram, a show starring real-life couple Dinesh and Rachitha, on ZEE5.