Parvathy finally finds a solution to the issue of office party, but it means going against Akhila´s wishes. What will it be? Read on to find out more. 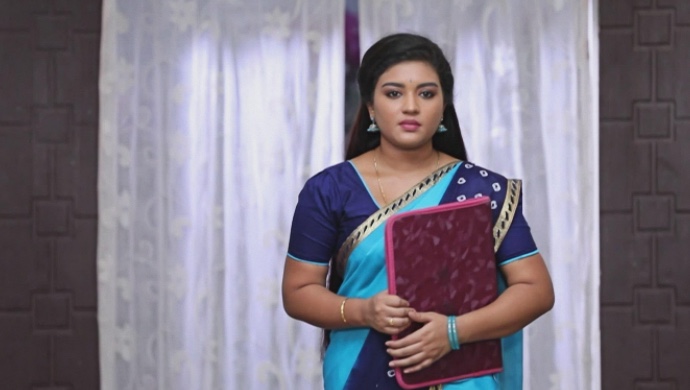 In the previous episode, Parvathy shares Akhila´s concerns about inter-team rivalry to the marketing team. The team head however, assures her they always intended to rope in both production and sales teams from the beginning. Expressing happiness over this, Parvathy promises to take it up with Akhila. Akhila, on the other hand is down with a cold and asks for thuthuvalai rasam just the way Parvathy makes it. But the current kitchen maid´s preparation is not upto mark and she sends it away. Akhila finally gets the thuthuvalai rasam she wanted, only to find out that Parvathy made it. Angry, Akhila refuses to drink the rasam and asks her to take it away. To her surprise, Parvathy refuses to do so and says that she is only doing it for the sake of Akhila´s health.

Purushothaman coaxes Akhila to drink the rasam that Parvathy made and points out that even in the past, Parvathy never refused her direct order without reason. Meanwhile, Parvathy is upset about it although she had a good reason for doing it. She confides in Adithya that she may have caused irreparable damage to her relationship with Akhila. Adithya, however, reassures her that his mom doesn´t like people who flatter her, but always respects honest people who say the truth to her face. Next day, Parvathy goes to Akhila to discuss the issue of the office party. Akhila asks her if she supports the marketing team or her, Akhilandeshwari. Parvathy responds that she is favours the workers´request. Even as Vanaja splutters angrily at her and Akhila shuts her up, Parvathy goes to say that the marketing team themselves have always planned to include production and sales team as well. Far from creating ego tussles between the three teams, it will actually improve their working relations, said Parvathy. To Vanaja´s surprise, Akhila agrees and gives consent to the party. Vanaja then speaks to Nandini and the two women decide to use their henchmen to get the employees drunk and create fights between them. They hope that this will oust Parvathy from her position and also create trouble for Akhila.

At the party, Parvathy is asked to speak and she talks about how Akhilandeshwari agreed to this party in order to improve relations between the team without even having any ego hang ups. Later when Akhila is asked to speak a few words, she refers to Parvathy´s comment and remarks at the outset itself that she will never give in to anybody for any cause. Her words cause Parvathy, Aishwarya and Aravind to stare at her in shock, while Vanaja looks on gleefully. What is Akhila going to say next? Will she humiliate Parvathy in public? To find out, watch Sembaruthi every night on ZEE5.

What Happens When You Pick Up Somebody Else´s Phone? To Find Out, Watch Romantic Comedy Thriller, Vadacurry!