Akhilandeshwari asks Parvathy to leave, but she refuses to do so. 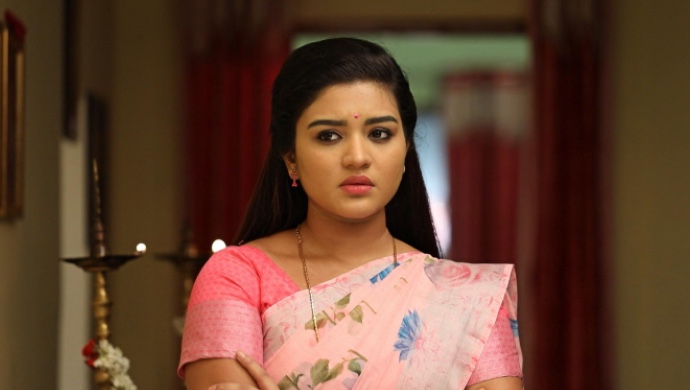 In the previous episode, Parvathy approaches Akhila in the course of her duties as goodwill ambassador. She explains that she was approached by the marketing team for permission to throw a party for achieving well beyond their target. Akhila asks her for her own opinion on the matter, but Parvathy doesn´t have any. Angry, Akhila retorts that she is not a messenger. She also points out that for her position, she ought to know that marketing team never works alone and is always supported by sales and production team. Furthermore, she added that throwing a party for one team creates ego tussles between the team. She tells Parvathy that she will forgive her just this one time. Parvathy is miserable knowing that she failed in her first meeting.

In the current episode, Parvathy gets a call from Adithya who’s on an international trip. She narrates what happened to him. He advises her to not give up and meet the team again and work out a solution that works for all. Meanwhile, Vanaja and Nandini think the times right to create unrest in Akhila´s company. Nandini calls up the production department head and tells him that the marketing team is planning a party for their achievements without roping in the other support teams. But that man refuses to believe her.

The next day, the marketing team approaches Parvathy again and she shares Akhila´s concerns about inter-team rivalry. The marketing team head however, assures her they always intended to rope in both production and sales teams from the beginning. In fact, they were hoping this would improve their inter-personal equations and lead to better working relationships. Expressing her happiness over this, Parvathy promises to bring up the matter again with Akhila.

In the next scene, Akhila is down with a cold and sore throat and looks miserable. She asks for thuthuvalai rasam and one of the kitchen maids makes it for her. But it is not upto mark and she demands that the rasam be made the way Parvathy made it. When she is peering into the screen of her laptop, a hand extends the mug. Sipping on that broth, Akhila exclaims in relief that this is the thuthuvalai rasam she wanted, just the way Parvathy makes it. She looks up to see Parvathy standing. Angry, Akhila asks her why she is making rasam when she has been banned from the household kitchen.Parvathy replies that she has not disobeyed Akhila and that she made this in the outhouse.

Akhila refuses to drink the rasam and asks her to take it and leave. To her surprise, Parvathy outright refuses to do so and says that she is only doing it for the sake of Akhila health.

Sembaruthi 13 December Preview: Akhila Is Angry At Parvathy But Misses Her Too

Sathya 14 December Preview: Sathya And Prabhu Have A Romantic Moment?