After learning about Parvathy's conundrum at the Kalyana mandapam, Adi also decides to go there and deal with Akhila. 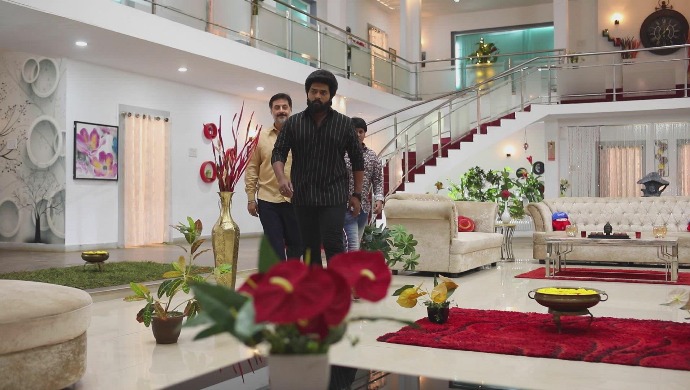 In the previous episode, Sundaram falls for Akhila’s threats and drags Parvathy to the Kalyana mandapam. Ganesha sees everything and decides to bring it to Adi’s notice. Meanwhile, at the mandapam, as Sundaram and Parvathy reach, Akhila behaves in a crude manner by asking them why they have been ignoring her calls. Neither of them respond to that question but Sundaram does express how loyal he is to her. Aishwarya tries to pacify Parvathy for what has happened however, she is unable to feel better as she wonders about Adi.

Tonight, as Parvathy and Aishwarya are in the changing room, Sundaram and Arun also enter. He then cries and explains how he cannot help it as loyalty means everything to him. He further adds that he is not that kind of a man to take his daughter to a wedding hall and get her hitched to another man while being aware of the fact that she is already married. Parvathy feels bad for Sundaram’s position and apologises for her behaviour. Aishwarya and Arun feel very bad as they too don’t know how to handle the situation. They just hope that Adi arrives soon and deals with the situation.

Aishwarya tells Parvathy to not get dressed as they will not take up any decision until Adi arrives. She leaves her alone and Parvathy meets the guru who she always meets at the temple. He gives her some words of wisdom as well as explains to her that she should not worry so much as all her problems will be resolved soon. This gives her the confidence she needs and Parvathy feels much better. Adi too decides to go to the kalyana mandapam as he cannot leave his wife to fend for herself alone in front of his mother.

Vanaja is chilling in the hall when she notices a troubled expression on Rishi’s mother’s face. She approaches her and asks what’s bothering her. To this, Rishi’s mother states that her family and relatives want to meet Parvathy but she doesn’t know if her daughter-in-law should be disturbed right now. Vanaja takes this as an opportunity to bother Parvathy by taking Rishi’s mother to her room. Since she hasn’t gotten ready yet, they both try to convince her to change for Rishi’s relatives. Parvathy loses her cool and asks them to leave her be as she will do things at the time she thinks is right. Vanaja and Rishi’s mother decide to take the matter with Akhila as Parvathy will listen only to her, out of fear at least.

Preview of the next episode: Guruji walks up to Akhila and talks to her about Mithra’s fingerprint. Vishu is also there with him and collectively, they plan to discuss it with her. Nandini notices this and freaks out a little as Vishu did see her with Mithra and probably knows about the fingerprint. Will the truth be revealed? Stay tuned!

How Will Devi Extract The Spirit Possessing Her Husband Krishna In Devi 2? Watch It Here!