Thanks to Ganesha's quick thinking, Akhila does not see the picture of Adi with their family. But are they off the hook yet? 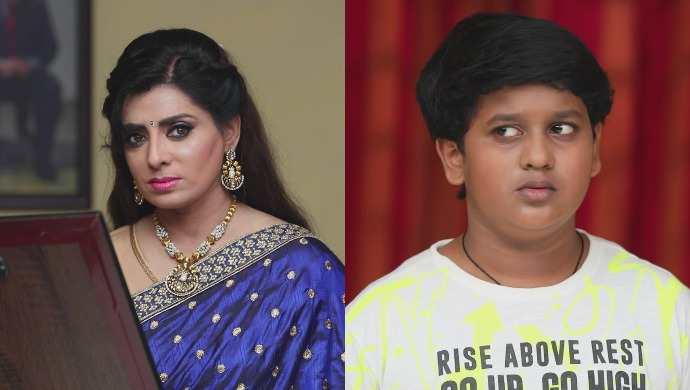 In the previous episode, Parvathy and Ganesha are busy gushing over their family portrait with Adi, when Akhila arrives. Although she comes to return the Shiva lingam that belongs to Parvathy, Akhila notices them holding a photo frame and gets curious. They are hesitant to show her the portrait as it has Adi in it. Just then, Sundaram fakes an accident and distracts Akhila from Parvathy, Ganesha, and the photo frame. Akhila asks Parvathy to stay at home and take good care of Sundaram. She leaves their house and almost forgets about the photo frame. Meanwhile, Sundaram asks Parvathy to be more careful around Akhila.

Tonight, Akhila returns to Sundaram’s house and startles everyone. She asks to see the family photo again and walks towards it. She picks it up and praises the picture. Sundaram and Parvathy are shocked by her response. As she leaves, Ganesha reveals that he switched the pictures when Sundaram caused the distraction. Ganesha is happy that his quick wit, helped the situation but Sundaram reprimands him for stubbornly asking for a photo. Parvathy reveals that she is certain about Akhila’s dislike towards her. She reveals that ever since the announcement of Adi and Mithra’s marriage, Akhila has been cold towards her.

Sundaram continues to worry about Parvathy’s situation when Adi arrives to meet them. He explains how he is going through immense stress, thinking about Adi’s birthday and Akhila’s decision. Due to his mental state of mind, Sundaram says that he can’t drive for Akhila anymore. Adi tries to apply reverse psychology, by explaining how he has been a loyal driver for her for so long, that it will be tough to find a replacement. However, it must be done as Sundaram doesn’t wish to continue.

Adi’s trick works as Sundaram agrees to continue his services for Akhila. Next day, Parvathy arrives at Adi’s place along with Ganesha. Purushottam asks what’s the occasion when Adi descends from the top floor. He asks what is the purpose behind calling Parvathy over, when Adi reveals that he has asked them to come over for a pooja to celebrate her win at the election. He also invites Sundaram to accompany them to the temple.

Initially, Sundaram declines the offer but eventually agrees. Just then Akhila also comes down and notices the crowd. She also asks what the occasion is for all of them to come over, when Adi explains that it’s for a pooja. He asks her to join them but Akhila refuses to join them and heads to work instead.

What will happen next? Stay tuned find out!