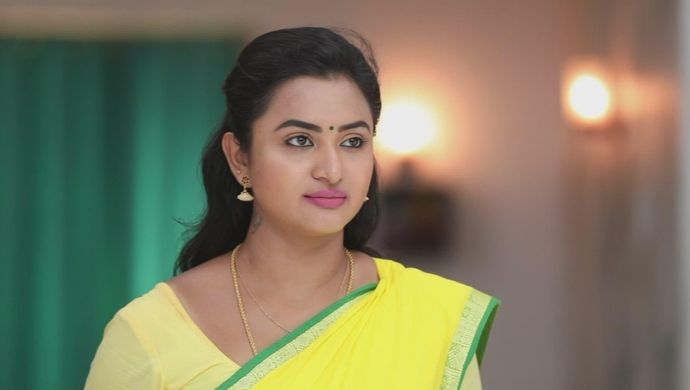 In the last episode, we saw that Nandini, along with Vanaja and gang, hired a guy to kill Aishwarya when they go inside water so Mithra can retrieve the spadika-lingam. Akhilandeshwari is also restlessly waiting to see the results of the task and to see which one of her daughters-in-law makes it. Aishwarya, on the other hand, is upset that Mithra is a part of the task instead of Parvathy, since she is the rightful eldest daughter-in-law of the house. Of course, Akhilandeshwari doesn’t know about Adithya and Parvathy’s secret marriage and no one wants her to know about it yet.

In the upcoming episode, Parvathy and Aishwarya are seen back in the house, telling Adithya and Purushotam about Akhilandeshwari’s whereabouts. On seeing the lingam in Aishwarya’s hands, Purushotam asks if she was the one who found it. Aishwarya gives Parvathy a look before saying anything else. They also tell the men that Akhilandeshwari stayed back with Mithra and Uma to meet the other villagers and offer their respects. How does Aishwarya retrieve the lingam? And what happens to the man who dives into the pond to kill Aishwarya? To know more, log into ZEE5 to catch the whole episode of Sembaruthi when it airs today evening.

For the ones who have missed the last couple of episodes, Akhilandeshwari is still pondering over what Adithya must have told her at the hospital. In the meanwhile, she also tells Aishwarya and Mithra that they will have to retrieve a spadika-lingam from a pond at a temple in the village and whoever retrieves it will be the worthy one. The family is, of course, worried about Akhila’s health and wonders how she will react if she finds out about Adithya and Parvathy’s marriage. For more such entertainment, watch Poove Poochudava streaming on ZEE5.