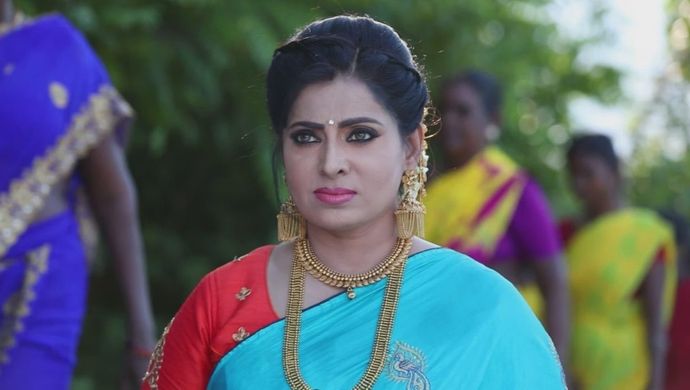 In the previous episode, Nandini, along with Vanaja and gang, hires a guy to kill Aishwarya when she goes inside the pond so Mithra can retrieve the spadika-lingam. Akhilandeshwari is also waiting to see which one of her daughters-in-law makes it, secretly hoping for Mithra to win. Aishwarya, on the other hand, is upset that Mithra is a part of the task instead of Parvathy, since she feels that Parvathy is the rightful participant of the task instead of Mithra. Of course, Akhilandeshwari doesn’t know about Adithya and Parvathy’s marriage yet, so she also doesn’t recognise the signals that she has been getting.

Adithya is restlessly pacing in the house and Purushotam asks him what is worrying him so much. Adithya tells him that he is worried about Akhilandeshwari’s life and also says that Nandini has tried to kill Akhila mutliple times. Purushotam is shocked upon finding out about it. Adi also adds that Akhila is unaware of the fact that someone attempted to kill her twice. They decide to not tell her since she might take the wrong decision hastily.

Purushotam assures Adithya that they are at their ancestral temple and God will protect her. Meanwhile, at the temple, Mithra and Aishwarya take a dip in the pond to find the lingam. Everyone is worried and waiting for the results. The hitman grabs Aishwarya’s leg just as they get closer to the lingam. Mithra ends up grabbing it but turns out it is just a shell that was right next to the lingam. Vanaja and everyone else are disappointed by it. She goes back inside.

Aishwarya somehow gets rid of the hitman and grabs Parvathy’s foot, pulling her inside the pond. The hitman is also about to kill them but gets attacked by a crocodile. Everyone gets worried on seeing blood coming out of the water. Vanaja and gang rejoice thinking that the hitman has killed Aishwarya.

Parvathy’s brother is praying to his mother’s photo at home asking her to somehow get Akhila to accept Parvathy. He narrates how Parvathy should participate with Aishwarya and says that Parvathy should be the one to retrieve the lingam. His father overhears him and lashes out at him.

Everyone is confused to see the man and Aishwarya remembers how someone had grabbed her foot in the water. Just as the police takes him away, Akhila spots Nandini in the crowd and figures that it was her plan. She asks the police officer to arrest her but the officer ends up making a deal with her.

The women reach the house and tell the men everything that happened at the temple. Parvathy tells them that Akhila is meeting the other villagers with Mithra and Uma and has asked the other two to reach home with the lingam. Purushotam asks who retrieved the lingam. Will Parvathy and Aishwarya make up a lie? To find out, watch Sembaruthi every night on ZEE5. For more such entertainment, watch Iniya Iru Malargal streaming on ZEE5.