Parvathy realises that she hasn’t completed her education. Adi decides to help her out with it. 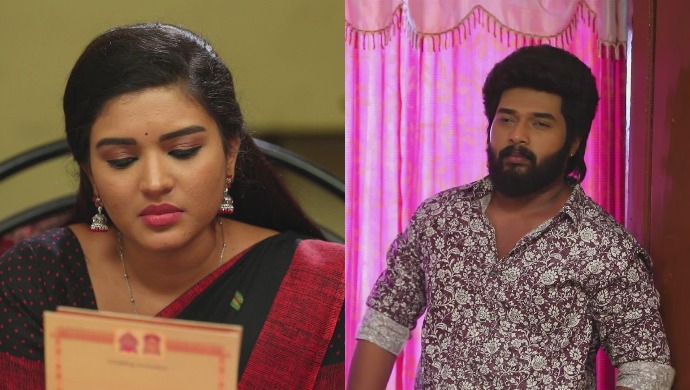 In the previous episode, Sundaram and Parvathy are worried, as they think Akhila might see the photo frame with Adi in it. However, she praises the picture and walks out. As she leaves, Ganesha reveals that he switched the photo frames when Sundaram staged a fall. Later, Adi comes over and coaxes Sundaram to join his duty, as Akhila’s driver. The next day, Adi decides to take Parvathy and her family to the temple, to do an archanai in her name, for winning the office elections. Akhila learns about it and is not too thrilled. In fact, Adi invites her to accompany them to the temple as well. However, Akhila declines the offer and states that she has work to do and can’t waste her time on such trivial matters.

Tonight, Adi asks Sundaram to take up driving. Just then, a drunk man approaches their car and stops it. He then asks Sundaram to come out of the car and says nasty things to them. Adi gets upset and slaps the man to his senses. He recovers and walks away and tells Parvathy, that nobody should disrespect Sundaram. Happy with his humble nature, Sundaram asks Ganesha to sit on the front seat, while asking Adi to go back, and sit with Parvathy. They reach the temple and Parvathy suggests that the archanai should be done, in the name of God.

All four of them hope that no external force should break Adi and Parvathy’s bond. Parvathy then asks Adi to apply kumkum on her forehead, and she does the same. They then sit down, and Parvathy talks about how visiting the temple with the whole family, is a beautiful memory that she will cherish. However, she also hopes that one day, she is able to do the same with Adi’s parents. Adi consoles her and tells her that everything will be okay soon. Sundaram asks a vaadiyar to do an archana in the name of Adi and Parvathy.

The vaadiyar states that the newlyweds will soon have babies. This makes Sundaram very happy. Vadivel rushes to Chitta swami, who suggests that Mithra is the lady love for him. He lashes out at him for fixing him up with Mithra. To this, the swami tells him, that this is a punishment that he is receiving, for separating two lovebirds in his past. Vadivel is unable to comprehend this and then the swami explains that he had separated two dogs, who were in love. Hence, this is a punishment for the same.

At home, Ganesha shows a wedding invitation he received from his friend. Parvathy reads the invitation and realises that the bride and groom are educated. However, Parvathy feels that she is far too uneducated for Adi. Just then, he overhears this and asks her if she wants to study. Will Adi make Parvathy complete her degree? Stay tuned!

Prabhu To Return To The Hospital To Tie The Scared Thread To Sathya?