Sundharam asks Parvathy to leave the house and return back to the village. She refuses and says that she will stay here no matter what happens. 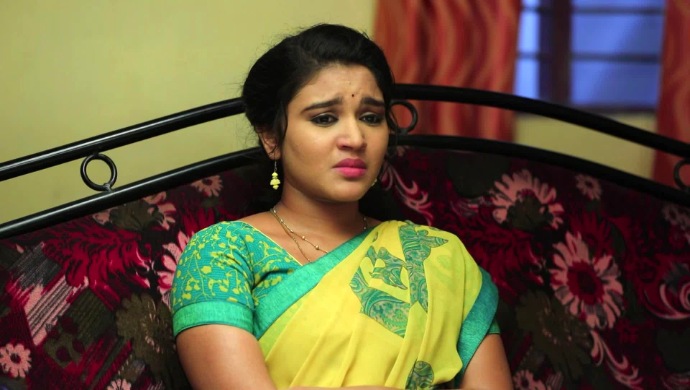 In the last episode of Sembaruthi, we saw that Adithya comes to meet Parvathy and he tells her about how he got into an argument with Akhilandeshwari over Parvathy’s issue. This shocks Parvathy and she asks him about the promise that he had given her about not arguing with his mother. And finally, he asks her to remove the thali. Later, Sundharam is worried about the next day’s trail that he might have to stand if what the astrologer had said comes true. Parvathy tries to console him but he does not listen to her but keeps worrying.

In today’s episode, we see that Purushotaman tries to drill sense into Vanaja’s mind and he requests her to keep quiet and not instigate Akhilandeshwari. To this Vanaja outrightly says no to him and says that she will do everything in her capability to stop Akhilandeshwari from accepting Parvathy in the house. This shocks Purushotaman and he feels helpless. He decides to go back to his room and sleep but there he finds Akhilandeshwari prancing around the room like an angry tigress.

Meanwhile, we see Parvathy is sitting in her home looking worried. She thinks about the incidents that happened during the day. At that moment we see Sundharam walks into the room and says that he has something important to discuss with her and he asks her to leave this house and return back to the village. To this, Parvathy refuses and says that she will stay no matter what happens.

At the same time, Adithya with the help of Shyam and Arun tried to make a plan to escape from Akhilandeshwari’s wrath. They think of possibilities to avoid confrontation, at that instance Ganesan walks in and he narrates to Adithya about his father and Parvathy’s conversation. Hearing this Arun and Shyam asks Adithya to run away with Parvathy. To this, he says no and he will try his best to live in the house with Parvathy.

Finally, we see Vanaja comes to visit Parvathy and she mocks her at her situation. She also says that Parvathy is for sure going to die at the hands of Akhilandeshwari. When Parvathy is confused about this surety that Vanaja seems to have, Vanaja says that she knows that what the astrologer had said about Adithya and Parvathy is true. This news shocks Parvathy.

So, what do you think happened? How did Vanaja get to know about Adithya and Parvathy’s marriage?

Watch Vetrivel: To Witness The Struggle Of A Young Man As He Tries To Bridge The Gap Between The Caste Systems