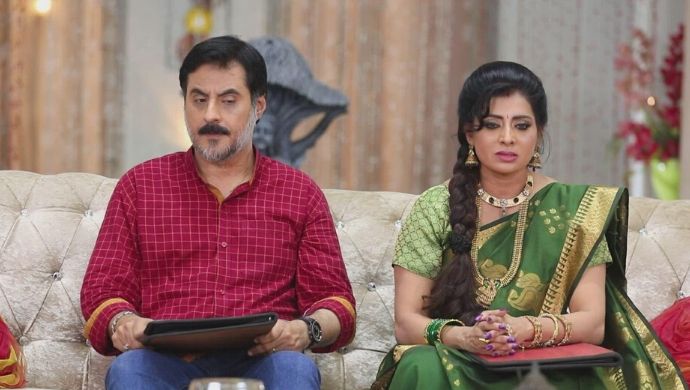 In the previous episode, Adithya overhears Akhilandeshwari promise Mithra that she will make her contest for the post of a Goodwill Ambassador. Adithya is aware of Mithra’s intentions and decides to make Parvathy contest the elections and defeat Mithra. Adi also aims to remove the image of a servant from Akhila’s mind about Parvathy. Vanaja and Nandini plan to make Mithra the Goodwill Ambassador to turn the workers against the management.

Vanaja tells Purushothaman that Akhila has decided to make Mithra the Goodwill Ambassador and Akhila then tells him that she was about to give him the news herself. Just then, Adithya enters and says that he has taken a decision against her for the first time. Akhila wonders what he has to say and is shocked when he says that he wants Parvathy to contest the elections since he doesn’t think that Mithra will be able to handle the post well. He also says that Mithra will only cause more problems than anything.

Akhila tries to oppose him but Adithya is firm on his decision. She is hurt that Adithya is going against her and making an opposite decision. Later on, Parvathy tells Adithya that she is quite nervous since she does not want to earn a bad name for herself in Akhila’s eyes. Adi assures her that they will find a solution to the problem and convinces her that she is the best person for the role. On the other hand, Akhila is upset that Adi went against her.

She goes on a rant and cries about it to Purushothaman. She also suspects that there is something brewing between Adi and Parvathy because otherwise, he would never go against her. She wonders what the real reason behind Adi supporting Parvathy is. Purushothaman gets nervous about her suspicions. Adi gets a call from the doctor who says that Deepak is recovering a little bit. Adi goes to see him at the hospital and asks him for proof against Nandini. He then seeks permission from the doctor and decides to take Deepak to his house so they can find the proof.

Karoline Kamakshi Promo: Meena And Giorgia Andriani Will Make You Laugh Till You Cry