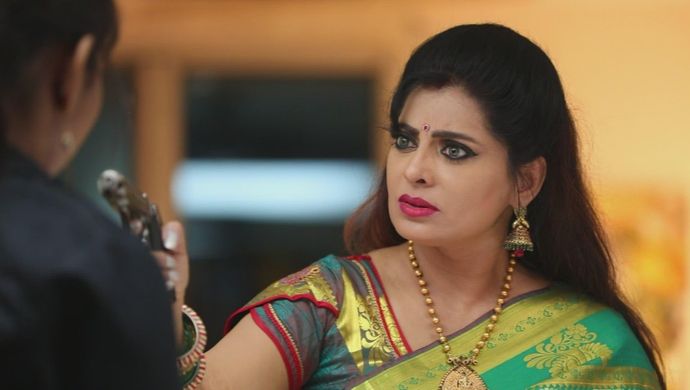 In the previous episode, we saw Aishwarya successfully retrieving the lingam, and foiling Vanaja and Nandini’s plans. Akhilandeshwari spots Nandini in the crowd and immediately suspects that she was the one who hired a hitman to kill Aishwarya. She decides to teach her a lesson and files a police complaint against her. But Nandini wriggles her way out of it by cutting a deal with the police officer. Akhila asks Aishwarya to head home with Parvathy, Vanaja and the lingam while she decides to stay back to greet some villagers with Mithra and Uma. Meanwhile, Adithya confides in Purushotam that the attempts on Akhila’s life were by Nandini.

Before Aishwarya could say anything, Parvathy interrupts and says that it was Aishwarya who retrieved the lingam. Just as they are about to go and place it in the puja room, Vanaja acts like she has been possessed by the Goddess and tells them that they are sinners. Parvathy falls for it and asks how to solve it. Vanaja then says that it should ideally be the older daughter-in-law who should keep the lingam in the puja room. She asks everyone to wait for Mithra or wait for Akhilandeshwari to keep the lingam in the puja room.

Adithya, who knows that Vanaja is acting, says that they need to cool her down first. Parvathy says that they could light a camphor and put it in her mouth so the Goddess leaves. Adithya then says that they will have to perform a blood sacrifice by Vanaja herself. In an attempt to escape their devious plans, Vanaja acts normal and tells everyone that she is feeling dizzy. She then asks the two to keep the lingam in the puja room and that she will go take rest.

Akhila comes back home later and asks Purushotam if they have kept the lingam in the puja room. Akhila asks if Aishwarya told them anything and then narrates everything that happened at the temple. She tells him that Nandini planned to kill her daughters-in-law. She thanks God for saving the two girls.

Akhila recalls how the lingam slipped out of Aishwarya’s hands and was caught by Parvathy. She decides to ask Guruji about it but decides to deal with Nandini first. Guruji tells the priest about everything that actually happened inside the pond. He also says that within 6 months, Parvathy will be treated as the daughter-in-law of the house with all due respect and nothing can stop it.

Akhila reaches Nandini’s house to threaten her and get some answers. She tells her that she knows Nandini was at the temple and she refuses to believe that Nandini was there to pray. Akhila slaps Nandini and points a gun at her threatening to kill her. Just as she is about to shoot, Nandini starts laughing.

Nandini then taunts her and tells her that Akhila has enemies inside the house itself. Nandini tells her that Akhila’s family members are hiding something from her, which takes Akhila by surprise. To find out what happens next, watch Sembaruthi every night on ZEE5. For more such entertainment, watch Poove Poochoodava streaming on ZEE5.