Parvathy asks Aishwarya not to refrain from claiming Arun's share. However, she says that he must speak to Adithya and not Akhilandeshwari. 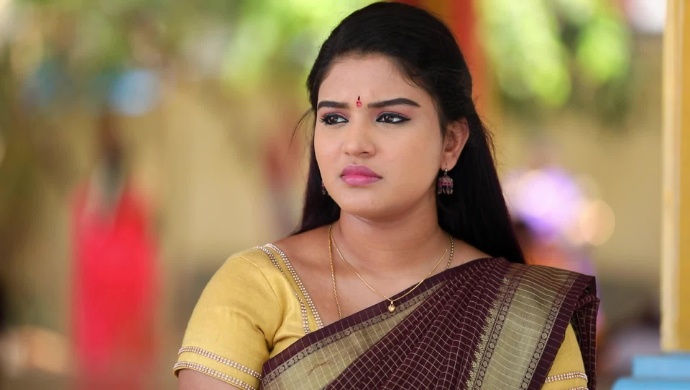 In today’s episode of Sembaruthi, Vanaja, who is thrilled after seeing Adithya insulting Arun, calls Nandhini to inform her about the miracle she witnessed at the Adhikadavur mansion. Nandhini, who is the mastermind behind the conspiracy, initially pretends as if she knows nothing about it, but in the end, reveals that it was her plan to create a rift between the two brothers. Vanaja admires Nandhini for executing the plan tactfully and feels that they will soon be able to achieve their target – Akhilandeshwari.

Later in the day, when Aishwarya sits all alone at a restaurant, wondering what to do to protect her husband’s image and reputation, Nadhini joins her table uninvited. She tells Aishwarya that she may dislike the Adhikadavurs but she doesn’t have anything personal against her. Hence, Nandhini gives her a suggestion to help Arun command respect. She says that Aishwarya must ask Akhilandeshwari to give Arun his share in the business. Initially, Aishwarya rejects the idea, but after realising that Nandhini’s idea wasn’t bad either, she decides to take appropriate steps. However, she refrains from speaking to Akhilandeshwari about it.

After offering prayers at the temple, Parvathy wishes to know what’s bothering Aishwarya. However, she is aware of the fact that Aishwarya didn’t approve of Adithya’s behaviour with Arun because of his recklessness. Finally, after giving it a thought, Aishwarya shares her concerns with Parvathy and tells her about what Nandhini suggested to her. She tells Parvathy that she is in a dilemma and doesn’t know how to approach Akhilandeshwari with the request of giving a part of the business to Arun. Parvathy asks her not to refrain from claiming Arun’s share. However, she says that he must speak to Adithya and not Akhilandeshwari, because he will understand her sentiments.

As suggested by Parvathy, Aishwarya visits Adithya’s office to discuss the matter. She says that Arun doesn’t command the respect and love like the way Adi does. She feels Arun gets neglected both at home and in the office. And when Aishwarya says she feels offended when someone insults her husband, Adithya gets reminded of Parvathy’s words. Keep watching Sembaruthi and for more entertainment, watch Sathya, the love story of a tomboyish girl on ZEE5.

5 Reasons Why You Should Definitely Watch Vijay Sethupathi Starrer Rekka