Akhila fires Sundaram from his job and cites dishonesty, as the reason. Will he reveal about Adi-Parvathy’s marriage to her? 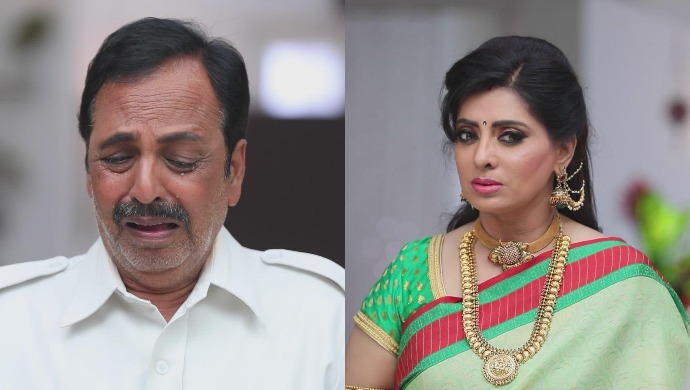 In the previous episode, Adi, Parvathy, Sundaram and Ganesha visit the temple. While Parvathy worries about the consequences of Akhila’s wrath concerning their marriage, Adi consoles her and tells her, that he will take care of everything. Sundaram does an Archana in the name of Parvathy and Adi. Later, Ganesha receives a wedding invitation from his friend’s sister. As Parvathy peruses the invitation, she feels bad about the fact that she hasn’t even completed 10th grade, while Adi has studied at big international universities. Adi overhears this and decides to help her, complete her education.

Tonight, Adi enters Parvathy’s house and asks if she wants to complete her education. Adi then tells her that she can do so by taking up evening classes or distance courses. Ganesha also states that Parvathy can complete her 10th grade even now since many people do the same. She is surprised that such options are available but worries about learning English. Adi offers to tutor her, so that she is more confident with the language. Akhila and Purushottam are busy figuring out the accounts regarding the company when Sundaram arrives. Vanaja is sad because there’s no drama happening in the house.

Sundaram tells Akhila that he is ready to join duty and can drive her to work. However, Akhila states that she wants to relieve him from his duties as her driver. He is shocked to hear this and asks her why she has taken such a decision. To this, Akhila states that a man’s white uniform and his loyalty should not be tainted. But his uniform is tainted with a black mark which she didn’t notice. With this, Akhila storms off to her room and Purushottam also follows her.

Meanwhile, Vanaja asks Sundaram to leave before Akhila comes with a gun to shoot him. Purushottam asks Akhila why she let go of Sundaram. To this, Akhila states that Sundaram has been trying to tell her something but something has been holding him back. She suspects that he probably knows what Adi has to tell her on his birthday, which he is hiding from her. Hence, Akhila fired him. Sundaram goes home and feels guilty for hiding the truth about Parvathy and Adi’s marriage. He feels terrible for breaking Akhila’s trust and cries thinking about it.

Sundaram thinks he should kill himself because he doesn’t deserve to live. However, he later decides to make Akhila kill him instead as he has done her wrong. Sundaram reaches Akhila’s place and falls at her feet. He cries incessantly and asks for forgiveness. Purushottam helps him get back to his feet and asks him why he is behaving erratically when Sundaram states that he has been dishonest with Akhila.

Where Will Vikram's Chase Lead Him To In R Madhavan - Vijay Sethupathi's Vikram Vedha?