Sembaruthi 16 July 2019 Preview: Parvathy Fears She Might Get Separated From Adithya?

In today's episode, Parvathy will fear getting separated from Adi after her chain falls off her neck while she prays in front of her mother's photo. 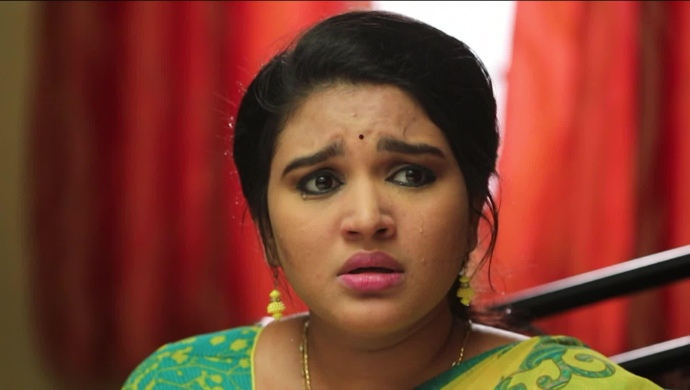 Akhilandeshwari, who gets rattled after her conscience challenges her to throw Parvathy out of the house, looks determined to follow the Guruji’s advice. In Monday’s episode, Akhilandeshwari asks Parvathy to only focus on her job, i.e., cooking and not interfere in anyone else’s responsibility. Thus, she indirectly tells Parvathy to keep away from Adithya and instructs Mithra to take care of her would-be husband’s needs.

Parvathy has tremendous love and regards for Akhilandeshwari. Hence she purposely proves she knows nothing about her when Akhilandeshwari asks her about her food preferences. Adithya knows Parvathy gave wrong answers on purpose, but he wants to know why she did so. And when he gets the response, he feels proud of his wife. He tells Parvathy that his mother is lucky to have a daughter-in-law like her.

However, the assumptions are far from reality. Akhilandeshwari knows Parvathy is a nice girl, but she refuses to accept her as a prospective match for her son Adithya. Even though she is caring, generous and loving towards Parvathy, she doesn’t wish to embrace her cook as a member of the Adhikadavur family, that’s known for its royal legacy.

In today’s episode, Parvathy will fear getting separated from Adithya after her chain falls off her neck while she prays in front of her mother’s photograph. Is that an indication that Adithya and Parvathy will get separated?
To know what happens hereafter, watch Sembaruthi tonight and for more entertainment, watch Piriyatha Varam Vendum, a love story based on the concept of reincarnation, on ZEE5

Bill From Mapla Singam Is Someone We Need In Our Society