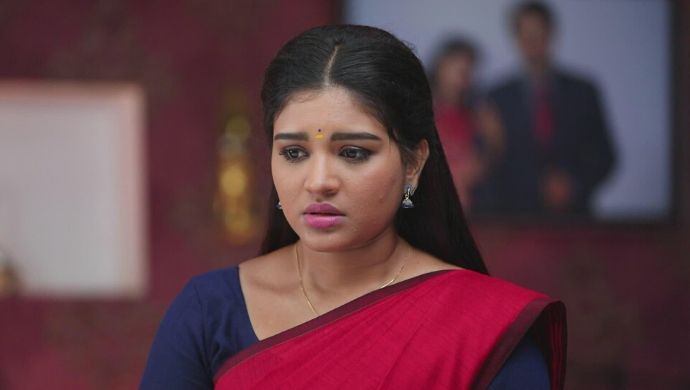 In the previous episode, Adithya tells Akhilandeshwari about his decision to make Parvathy contest the company elections and become the next Goodwill Ambassador against Mithra. Akhila is shocked and upset over Adi’s decision. She suspects that Adi is doing so for a different reason. She rats Parvathy out to Sundaram and asks him to talk to his daughter about stepping down from the upcoming elections. Meanwhile, Adi finds out that Deepak is recovering at the hospital and immediately meets him to find evidence against Nandini.

Sundaram scolds Parvathy for being disloyal to Akhila and standing in the elections opposite her. Parvathy tells him the entire truth about Mithra and her intentions. Even then, Sundaram compels her to step down to which Parvathy says that she is not going to leave her husband’s side at a time of crisis. Sundaram hesitantly tells Akhila that Parvathy has not changed her decision and she leaves fuming.

Meanwhile, Adithya takes Deepak home and makes him meet his wife and son. Although Deepak doesn’t speak at all, he keeps looking at a certain keychain when Adi repeatedly asks him about what evidence he has against Nandini. After multiple attempts, Adi notices the keychain and checks the pen drive. Deepak records a video in the pen drive where he asks Adi to go to a certain place to collect evidence against Nandini.

While Adi is busy gathering evidence against Nandini and Mithra, Akhila is trying everything in her power to intimidate Parvathy. She calls and asks her to get some coffee. Parvathy obliges. After having the coffee, Akhila taunts Parvathy about proving her wrong and even questions her loyalty to the family. Parvathy breaks down and tells Akhila that if her loyalty to the family is being questioned here, she will step down from the elections and leaves the room crying.