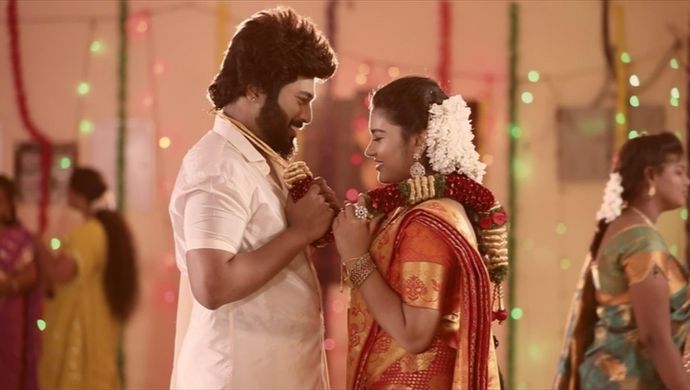 In the previous episode, Akhilandeshwari tells Purushotam that Nandini tried getting Aishwarya and Mithra killed. An angry Purushotam asks her to hand Nandini over to the police but Akhila assures him that she will take care of this her own way. She reaches Nandini’s house, points a gun to her head and threatens to kill her if she doesn’t leave her family alone. Nandini laughs and tells her that she doesn’t know a lot of secrets that she should know and that all her family members are keeping it from her. Akhila is shocked to hear this and lowers her gun.

Nandini tells Akhila that everyone in her house is making a fool of her. Akhila refuses to believe her but is a little shaken to know that even Nandini knows that something is bothering her. Nandini asks her to find out about all the enemies in her own house and then target her. Akhila quietly leaves her house and Nandini is basking in the glory of her minor triumph.

Akhila goes to meet the Guruji and asks Sundaram to handover the fruits that she got for Guruji. Akhila tells him that she has a minor complication with the whole spadika-lingam incident and wants him to solve it. She tells him about how the lingam slipped from her hand and Parvathy got hold of it. Sundaram is also shocked to hear it. Akhila tells Guruji that she has been confused as to why the lingam slipped from her daughter-in-law’s hand to Parvathy’s hand and if there is any sign she should know of.

Nandini tells Vanaja that Akhila has found out about her plan. The two of them discuss about how they will get out of this pickle. She tells Vanaja that she sent Akhila away by only confusing her more and throwing a riddle in front of her. Vanaja tells her that she has only invited more trouble. Nandini assures her that Akhila will never doubt Mithra or them for a long time.

Akhila is constantly pondering over Guruji’s words. She also recollects all the times Adithya and Parvathy came closer to each other. Akhila is wondering how to find out the truth.

Vanaja calls a maid and lashes out at her for not cleaning her room. The maid forgets to place the receiver back properly. Later on, Adithya is getting hiccups and tries to call the kitchen but is unable to reach. He then calls Parvathy but even she doesn’t answer his call. He opens his bedroom door to go to the kitchen and finds Parvathy waiting for him with a glass of water. He gulps the water down but the hiccups don’t go anyway. To get rid of it, Parvathy tells him that she loves him and the hiccups go instantly. She tells him that she only said that to stop his hiccups.

She tells him that she was thinking of him while chopping vegetables and figured that maybe he was getting hiccups because of her thoughts so got water for him. She leaves the room after he laughs at her. For further updates to this love story, watch Sembaruthi every night on ZEE5. For more such entertainment, watch Rettai Roja streaming on ZEE5.

Sembaruthi 16 October 2019 Preview: Adithya Is Stunned To Hear Parvathy Say 'I Love You'

#ThrowbackThursday: This Old Photo Of Sembaruthi’s Purushothaman Will Leave You Surprised