Aishwarya gets inspired by Parvathy and thanks her for showing her the right path. Parvathy reveals that she learnt all about it from Adithya. 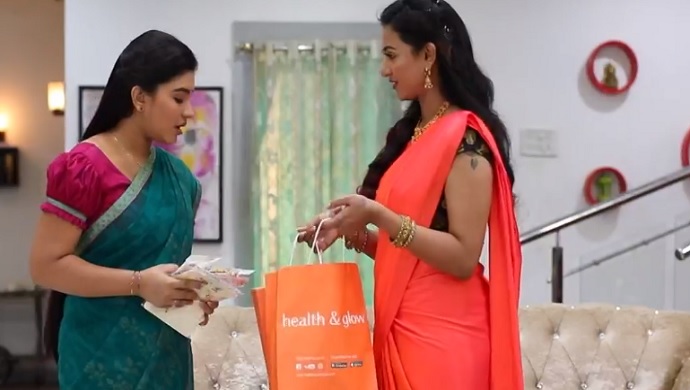 In today’s episode of Sembaruthi, Aishwarya and Parvathy’s bond strengthens and it is good news for their fans. Read on to know how the episode unfolded. The priest, who had asked Akhilandeshwari to wait until he gets a signal from the God, looks at a tree on the other side of the pond. After waiting for a while, when he sees a snake appearing from one of the branches of the tree, he asks her to put the Spatika Linga in water.

Later in the evening, Vanaja and Mithra meet Nandhini to discuss what happened throughout the day in the temple. Like Vanaja, even Nandhini feels that there’s more to it than meets the eye. Hence she hopes that they learn about Akhilandeshwari’s plans about the Spatika Linga before it turns out to be detrimental to Mithra.

Next morning, when Aishwarya stands in the garden area looking tensed, Parvathy asks her to share her concerns with her. Aishwarya tells her that the profit percentage of her hotel has declined since last year. She says that a number of small hotels have sprung up in the area. She wonders how to stop the small hotels from flourishing to maintain their growth and profit. Parvathy tells her that she would suggest something to her only if she doesn’t get offended. Aishwarya asks her not to be formal and tell whatever she wishes to say. Parvathy tells that one must do business by following certain ethics. She says that instead on focusing on stopping the competitors from growing, Aishwarya must think of improving her business. Aishwarya gets inspired by Parvathy and thanks her for showing her the right path. Parvathy reveals that she learnt all about it from Adithya.

Later in the day, Akhilandeshwari overhears Mithra talking to someone on the phone and asking the person to overpower their competitors by hook or crook. Aishwarya intervenes and says that Mithra mustn’t think of suppressing her competitors but focus on ways to make her business better. But Mithra isn’t convinced. She asks Akhilandeshwari to tell who among her and Aishwarya is right. Akhilandeshwari asks Adithya to narrate her views and in the end, she says that Aishwarya is right. Mithra feels dejected and humiliated while Aishwarya looks elated. Later, Aishwarya thanks Parvathy for giving her an appropriate suggestion. Thus, Parvathy and Aishwarya’s bond strengthens. Keep watching Sembaruthi, and for more entertainment, watch Oru Oorla Oru Rajakumari, on ZEE5.

#TakeMeBackTuesday: Here's How Chaitra Made Nakshatra's Birthday Bash A Memorable One