Sundaram wants Akhila to kill him, for being dishonest to her. Will she go ahead? 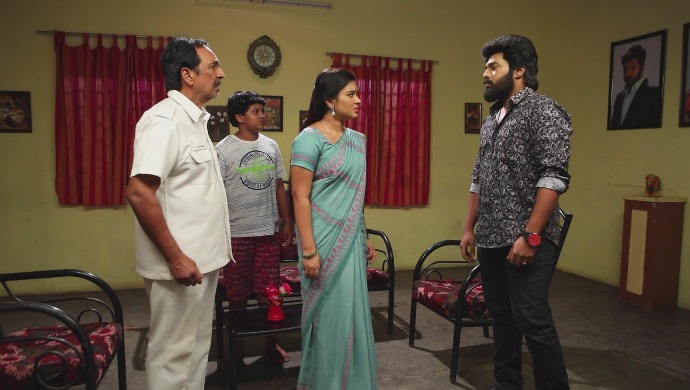 In the previous episode, Sundaram reaches Akhila’s place and informs her that he is ready to resume work. However, Akhila fires him, as she believes that he has been disloyal to her. This affects him tremendously, as he thinks Akhila knows the truth about Adi and Parvathy’s marriage. Sundaram goes home and starts pondering over the incident. He feels extremely guilty for being dishonest with Akhila, and decides to kill himself. But then he thinks it’s best to reveal the truth to Akhila, and ask her to do the deed instead. He goes to meet her and falls at her feet, asking for forgiveness.

Tonight, Sundaram’s guilt takes over as he states how he has been dishonest with Akhila. In fact, he feels so bad that he asks Akhila to get the gun and shoot him. Sundaram believes that since what he has done is unforgivable, she should end his life. However, before getting killed, Sundaram says that he wishes to reveal everything to her. Akhila stops him and asks him to not say anything, as she knows everything. In fact, with his tears, Sundaram has managed to wash off the dirt that clouded his honesty. Akhila is happy that he is her old Sundaram and hence, she doesn’t need him to explain himself.

She then asks him to go home and rest for the day. Sundaram goes home and tells Parvathy and Ganesha about the incident with Akhila. He assumes that Akhila knows about Parvathy and Adi’s marriage. He suggests that even Parvathy should apologise to Akhila, so that she will be forgiven, just like him. She is uncertain about it, as she thinks it is best to consult Adi first. Parvathy is apprehensive about the move, when Sundaram tries to force her to go with him and meet Akhila.

Just then, Adi enters the house and notices the scene. Sundaram informs Adi about the same thing. To this, Adi tells him that Akhila doesn’t know everything as Purushottam has told him what had happened. He further reveals that Akhila only knows about Adi liking Parvathy and not about their marriage. Sundaram is confused, so Adi explains to him about his interaction with the deaf and mute girl, who told Akhila that Adi likes Parvathy, after reading his lips in the hospital video.

Despite this information, Sundaram is adamant about telling Akhila everything. Adi then requests him to stay patient for a little longer. Finally, Sundaram agrees to do as told, but expresses his anxiety surrounding the same. Adi then goes to meet his associate, who is trying to extract more information about Mithra. He states that Mithra is the only child, as per records. But Adi is certain that Nandini and Mithra are siblings. Adi suggests that the associate should do research about Mithra’s parents and get more information on the same.

Will Thiru Be Able To Save His Wife From Thugs In Sindhubaadh?

These Videos Of Shruti Haasan Performing In London Clubs Will Amaze You!