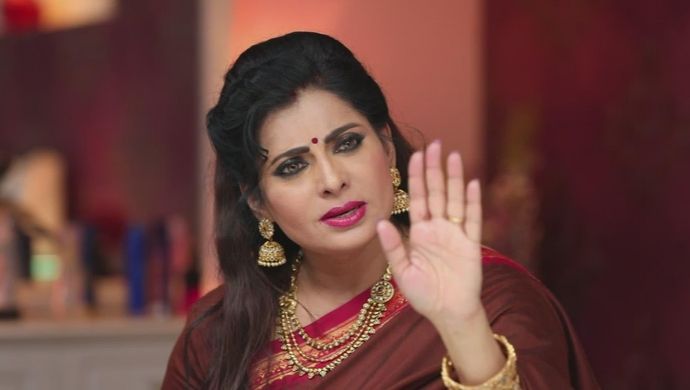 In the last episode, Akhilandeshwari is perplexed upon finding out that there is something fishy going on in her house and Parvathy has something to do with it. Even the Guruji reveals to her that Parvathy was the one who originally retrieved the lingam and it is the lingam that will guide Akhila to the ultimate truth. Akhila is confused about the whole situation and keeps recollecting all the times she sensed Adithya and Parvathy growing closer to each other. She is convinced that something is being hidden from her and decides to find out what it is, by hook or by crook.

Parvathy’s father scolds her for retrieving the lingam from the pond. He tells her that Akhilandeshwari knows about it now and is very upset about it. Parvathy is stunned to know everything that Guruji told Akhila. Parvathy’s father asks her to break up with Adithya and start behaving badly with him so he himself calls it off. A distressed Parvathy tells him that she will go to the temple and do whatever the Goddess asks her to do. A crying Parvathy leaves for the temple.

Meanwhile, Akhila is in deep thoughts in her room. Purushotaman enters and asks her what is bothering her. She tells him everything that is bothering her. He tries to talk her into accepting everything positively and she lashes out at him. She tells him that she will never accept Parvathy as the daughter-in-law since the honour of her family is more important to her. She refuses to listen to him.

Ganesh tells Adithya everything about what his father asked Parvathy to do. Adithya leaves for the temple to talk to Parvathy. He meets her there and tells her that no matter what, he will not leave her. To his surprise, she also tells him that she will never part ways with him or leave him alone. When he asks what changed her mind, she tells him about a certain incident that she witnessed at the temple.

Parvathy saw a woman performing a painful penance in the temple praying that her long-lost husband returns. She also says that she believes in the Goddess and her husband will surely return after 4 years. This incident really moves Parvathy and after talking to a priest at the temple, she is assured that love will find its way somehow. For more such entertainment, watch Poove Poochoodava streaming on ZEE5.