Sembaruthi 18 April 2019 Written Update: Akhilandeshwari And Nandhini Have A Face-Off?

Akhilandeshwari asks Mithra to accompany her to an important place that she is going to visit. 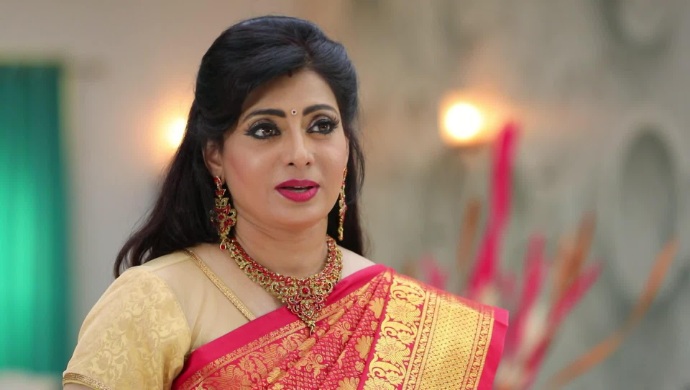 In the last episode of Sembaruthi, We see that Mithra and Vanaja are not happy when they see Arun and Aishwarya’s growing closeness. Later, we see Adithya asks for Akhilandeshwari’s approval to arrange for a party to celebrate her becoming an MP. Although Akhilandeshwari does not approve of it initially, later upon the insisting of her husband, she agrees. Followed by that, we see that Adithya and Parvathy are having a serious conversation and Adithya informs her that he is planning to keep a reception event for them amidst the party arranged for Akhilandeshwari. Finally, we see that Mithra receives a call from an unknown number and the person starts blackmailing her about revealing her true identity to the world.

In today’s episode, we see that the blackmailer is blackmailing Mithra. She is worried about the uncertainty of this stranger. Meanwhile Arun, Shyam and Adithya get into a discussion, Adithya informs them about his plan to make his reception party look like a party arranged for Akhilandeshwari’s win.

We see that Akhilandeshwari is speaking with Mithra and she asks her to accompany her to an important place that she is going to visit. However, Mithra is shocked and cannot respond. Later, we see that Vanaja goes to visit Nandhini and they make plans to avenge her. Incidentally, Vanaja informs her about Adithya’s plan to arrange for the party, she also speaks her doubt about Adithya’s intention. Meanwhile, Vanaja happens to see Akhilandeshwari’s car at the doorstep and is worried about it. Vanaja is petrified and she informs Nandhini about it.

Akhilandeshwari tells Mithra that they are going to meet a very important person. And they both walk into Nandhini’s house. It is a tense situation for all of them. Vanaja desperately tries to hide but she is too jumpy. Meanwhile, Akhilandeshwari knocks at the door and Nandhini opens the door. they both look into each other’s eyes and there is a lot of hatred in them.

So what do you think will happen? Will Akhilandeshwari confront Nandhini?

Half Girlfriend: Watch The Confusion Of Love As It Shifts Between The Unsure Lovers