Unable to find any new information on Nandini and Mithra’s relationship, Adi decides to plant a spy in her office to get to the truth. 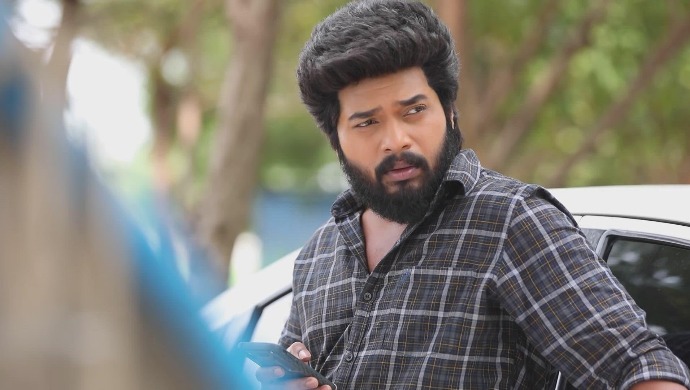 In the previous episode, after Akhila fires Sundaram, he feels guilty and assumes that she knows about Parvathy and Adi. He is about to reveal everything to her, when she stops him from saying anything. Akhila states she can finally see her loyal Sundaram again and doesn’t need to prove himself. Vanaja is upset with her for not letting Sundaram speak the truth. He thinks she has forgiven him despite knowing the truth. Hence, he forces Parvathy to do the same. Adi arrives at their place and talks him out of this plan. He states that Akhila does not know anything except that Adi loves Parvathy.

Tonight, Adi informs Parvathy that as per his conversation with Vasant, Nandini is her parents’ only child. She is surprised, as she has been hoping that Nandini and Mithra’s truth will save them from the forced marriage. Adi tells her not to worry as they will figure a way out. He then asks her to concentrate on her studies, as her exams are nearing. She is hesitant to study, as she doesn’t like English. He offers to help her out and asks her to get the book. Parvathy refuses to study and walks away but Adi chases her.

The two then run into Sundaram, who asks them to sit inside the house and study. They flirt a little and exchange cute glances. At Adi’s place, Akhila informs Purushottam that she has to go to Delhi for a Rajya Sabha meeting, as she is an MP. Just then, Sandhya arrives and meets Akhila. Sandhya announces that a federation has announced Akhila and Adi as best mother-son duo. For the same, she has brought a bouquet as well. Although initially, Akhila has a smile on her face, it soon fades. Sandhya also states that the event will be taking place in Hyderabad.

Back in her room, Akhila tells Purushottam that she doesn’t think she deserves to be part of the event, as things have changed between her and Adi. However, he consoles her and tells her that she shouldn’t overthink. Adi meets Vasant and asks about proof concerning Nandini and Mithra. He reveals that there is no proof of the same, but suggests an idea.

Vasant states that he can arrange for an informant to work closely with Nandini, and give them the information they want. Adi is hesitant at the start but decides to take it up, as thinking about the deals, is worthless at the moment.