Adithya is riding the bike as Parvathy is sitting behind him and they both look cute together, on the bike. 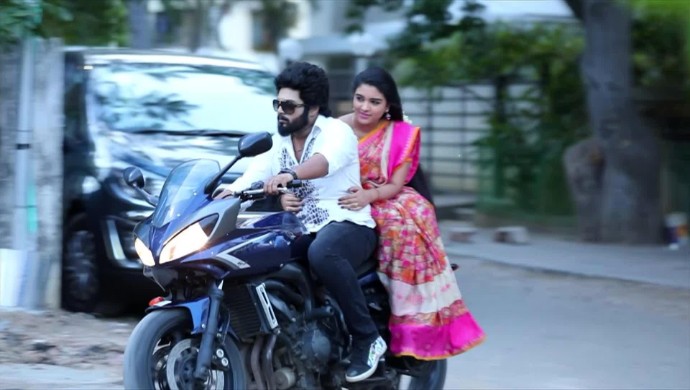 In the last episode of Sembaruthi, Arun, Shyam and Adithya get into a discussion and Adithya informs them about his plan to make his reception party look like a party arranged for Akhilandeshwari’s win. Later, Akhilandeshwari is seen speaking with Mithra and she asks her to accompany her to an important place that she is going to visit. Thus she takes Mithra along with her to Nandhini’s place. Mithra is shocked with this sudden plan of Akhilandeshwari but she is too surprised to say anything. Meanwhile, Vanaja who is at Nandhini’s place sees Akhilandeshwari walking in and is petrified.

In today’s episode, we see that Adithya is riding a dashing bike at a good speed and Parvathy is waiting for him at someplace. She looks a bit anxious but later, we see a romantic sequence where Adithya is riding the bike as Parvathy is sitting behind him. They both look cute together and it seems that they are going on a casual ride. At this moment we see that Parvathy is looking relieved and she seems happy with Adithya.

What do you think will happen next? Let us know in the comments below!

Do you like to watch more such Tamil series? Then your search is over, for ZEE5 has an extensive collection of Tamil TV shows and original series.

Sembaruthi 18 April 2019 Written Update: Akhilandeshwari And Nandhini Have A Face-Off?