Adithya and Purushothaman are shocked to see Akhilandeshwari asking Purushothaman to return the chain while Vanaja, Mithra and Uma are happy. 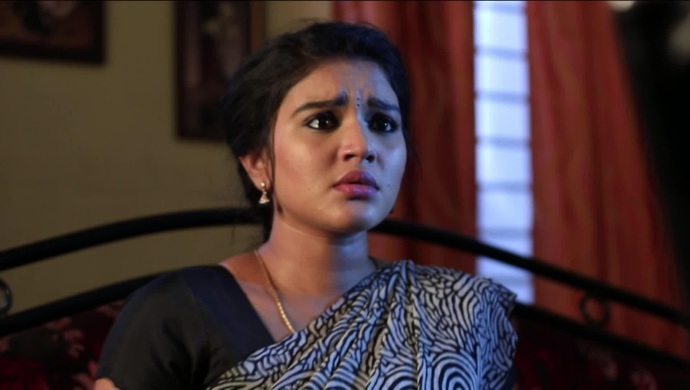 Akhilandeshwari is no longer in the mood to let Parvathy stay in the house. She knows Parvathy’s exit would mean bidding goodbye to a loyal staff like Sundaram, who has served her family for over twenty five years. But she is ready to let Sundaram go because she is more concerned about her family pride. In today’s episode, Akhilandeshwari displays dozens of gold jewellery on the table and asks Sundaram to take everything and in exchange, return her ancestral chain that she had gifted to Parvathy. Adithya and Purushothaman are shocked to see Akhilandeshwari asking Purushothaman to return the chain while Vanaja, Mithra and Uma are happy.

Meanwhile, Parvathy, who is in the temple, senses something is wrong. Her intuition tells her that Akhilandeshwari may not make a decision in her favour. Moreover, she fears she may lose the priceless chain Akhilandeshwari had out around her neck as her blessings. And her worst fear manifests into reality when Akhilandeshwari does the unthinkable.

Sundaram, who refuses to take the gold jewellery, agrees to return the ancestral chain as soon as Akhilandeshwari tells him about it. But Vanaja stops him by saying that the chain must return home at an auspicious time. She probably thinks of hatching a plan to embarrass Sundaram and Parvathy by hiding the chain.

A while later, Adithya visits the outhouse to request Purushothaman to remain tight-lipped about the chain. He requests him not to tell Parvathy about it. Later in the evening, Adithya takes Parvathy out for shopping to spend some time with her. Will someone spot Parvathy and Adithya together? To know what happens hereafter, follow Sembaruthi on ZEE5 and for more entertainment, watch Piriyatha Varam Vendum, a love story that transcends time.

Karthick Vasu's Latest TikTok Video Will Leave You In Splits