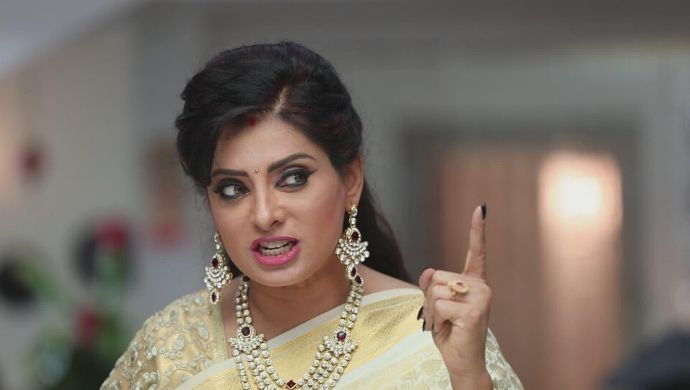 In the previous episode, Parvathy tells Adithya about her conversation with Akhilandeshwari and her decision to step down from the elections. However, Adithya tells her that it’s important that she contests the elections against Mithra and also tells her that he is gathering evidence against the sisters through his sources. Parvathy somehow decides that she will contest the elections and leaves from home to register at the office but gets attacked by goons. Adithya heroically saves her from the goons.

In the office, Mithra, Vanaja and Akhila enrol Mithra in the elections. They are happy that Parvathy did not make it to the elections. Akhila also tells them that she had a word with Parvathy about it. Their happiness is short-lived when Parvathy and Adithya arrive. He gets her enrolled despite Vanaja’s protests. Akhila is furious at the two. Mithra is wondering what happened to the goons that Nandini sent.

At home, she yells at Parvathy and asks if she lied to her about stepping down. Parvathy is tongue-tied and just then, Adithya enters and takes the blame. He tells everyone that he compelled her to do it. He also instigates Mithra by telling her that she doesn’t want Parvathy to contest the elections because she is scared of losing to her. Mithra accepts the challenge and Akhila warns her that she shouldn’t lose after reminding her of how she lost to Parvathy at the dance competition. Everyone leaves the living room. Later on, Vanaja and Mithra try to turn Aishwarya against Parvathy.

World Television Day: 5 All Time Favourite Shows That You Can Watch Again