Akhila overhears Sundaram praising and his daughter about her victory in the elections and does not like it at all. 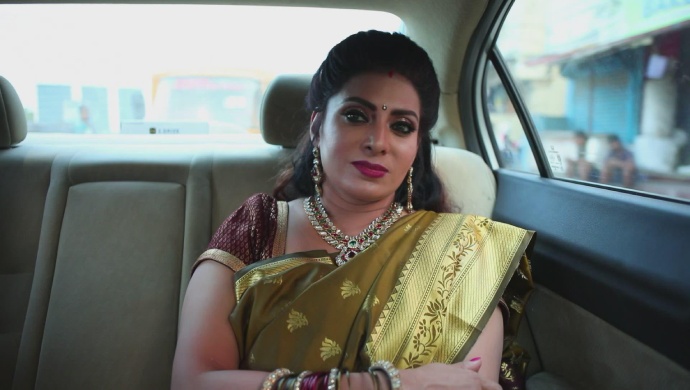 In the previous episode, Akhila tells Purushothaman that she is sure Adithya spoke to her about Parvathy while she was in coma. At the board meeting, Akhila feels insecure as the board members applaud Parvathy. Later, Akhila watches as Parvathy takes Sundaram’s blessings.

Akhilandeshwari overhears the conversation between her driver, Sundaram and Parvathi, who tells her how proud he is of her for having won elections. Later, Akhila brings up this topic in the car and tells Sundaram that Parvathi is making the same kind of mistakes as Sundaram. Given her innocence and calm, Parvathi is best suited to get married in order to live a peaceful life. Instead she’s getting too ambitious about competition, politics and responsibility which is very unlike her.

She also indirectly threatens Sundaram saying that she’s scared that this new version of Parvathi will affect her own family and her life negatively. She also says that while she’s ready to take up all the responsibility of getting Parvathi married, it looks like Parvathi will turn around to be her potential enemy. Sundaram feels helpless in this situation.

Later, when Parvathi serves food to everyone at the dinner table, Vanaja starts criticising the food cooked by her. Akhilandeshwari stops Vanaja from shouting at Parvathi and says that she has become a busy woman now and too important for anyone to criticise her.

Adi comes back from a call to hear his mother sarcastically commenting on Parvathi and stops her. Parvathi tells Adi in private that she will always be a cook to Akhilandeshwari and it is the right of her mother-in-law to criticise her. Adi comforts her and asks not to pay heed to anything his mother says as it she is just taking out her frustration on Parvathi.

Later, while Parvathy is cleaning, she finds Mithra’s pen-drive which they had been hunting for a long time. She hands it over to Adithya.

If you are new to the series Sembaruthi, here´s what you need to know. Aditya, the scion of a rich family ends up secretly marrying Parvati, the household cook, in order to bail her out of a troublesome situation. However, they hesitate to tell this to Aditya´s mother Akhilandeshwari, who has very strong notions of wealth, status and honour. In order to soften her view of Parvathi, Aditya urges Parvathy to stand for elections in their company as a goodwill ambassador hoping that his mother would view his wife as a person who is more than just a domestic servant. Despite being pitted against Akhila´s nominee, Mithra, the election results come out in favour of Parvathi, which is not to the matriarch´s liking.

Watch Thiravam, A Thriller About A Scientist Who Invents An Herbal Fuel That Threatens The Petroleum Industry