Vanaja asks Mithra to agree if she wants to get married to Adithya and stop Purushothaman from executing his birthday plan. 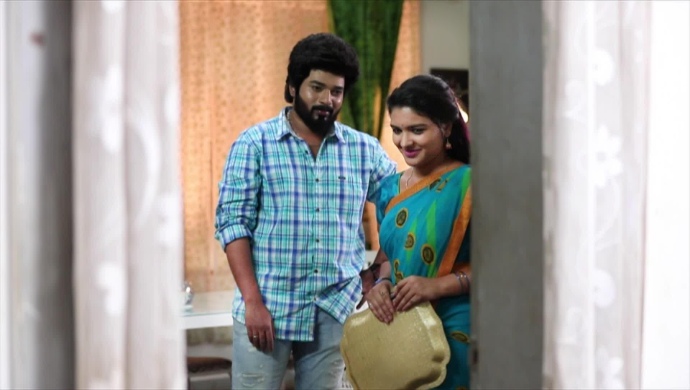 Will Akhilandeshwari give her consent to Mithra to perform the special puja to win the blessings of the Adhikadavur ancestors? To know what happened in today’s episode, read on. Akhilandeshwari explains what all Mithra must do to perform the three-day long puja. She tells Mithra that she must follow strict rules and observe a fast while performing the Puja wherein she will have to worship the materials used by her ancestors. In the end, if the Spadiga Mala remains white it would indicate the acceptance of Mithra’s prayers but if it turns dark, then she wouldn’t get the ancestor’s blessings.

Vanaja asks Mithra to agree if she wants to get married to Adithya and stop Purushothaman from executing his birthday plan. Later in the day, Adithya tells Parvathy that he wants her to perform the puja but she fears the consequences. He asks her not to worry and tells her to perform the puja in his room. He hands over his ancestor’s footwear and walking stick to Parvathy for worshipping them during the puja.

Parvathy lands in a dilemma so she meets Thatha in the temple to find a solution. Thatha instantly gets to know that Parvathy is in trouble and asks her not to worry. When she explains her concerns, he asks her to do the puja that will turn out to be a boon for her but at the same time, create small temporary trouble.

At night, when Parvathy sits quietly thinking about what she must do, Ganesh asks her to share her concerns with him. When she starts narrating about the Adhikadavur Puja, Sundaram overhears their conversation. Will he come to know that Adithya and Parvathy are married? Let us know what you think in the comments below!

Sa Re Ga Ma Pa Seniors Season 2: All You Need To Know About Toronto's Thamiraa