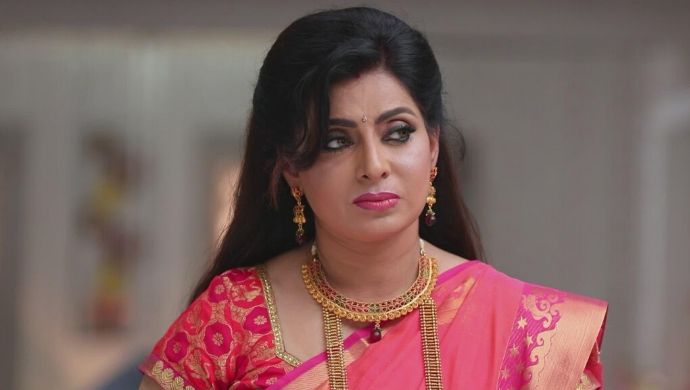 In the previous episode, Parvathy overhears Mithra talking to Nandini and finds out that they are planning to leak some classified information from Akhila’s laptop. Parvathy rats her out to Akhila who gets mad at her for accusing her daughter-in-law. She storms into her room and finds Mithra fidgeting with her laptop. Mithra makes up an excuse about wanting to send an email from Akhila’s laptop since hers is broken and Parvathy gets a scolding from both, Akhila and Sundaram. Later on, Akhila tells Purushothaman that she is actually suspicious of Mithra and not Parvathy.

Parvathy tells Sundaram the truth about Mithra’s identity and he is shocked. Akhila tells Purushothaman that Mithra could have just called and asked for her laptop password if she wanted to send an email. The fact that Mithra chose to act so sneakily convinces Akhila that she has something up her sleeve. Purushothaman is glad that Akhila is on the right track and agrees with her.

Later on, Mithra tells Nandini how she escaped from getting caught by AKhila. Nandini slaps her and tells her that Akhila might be suspicious right now which is why she scolded Parvathy instead of her. She asks Mithra to be extra careful now. She tells Mithra that Akhila changed her laptop password for some reason before leaving for the temple. Nandini asks Mithra if Akhila asked her how she knew her password and Mithra says she must have forgotten since she was mad at Parvathy.

Nandini tells her that Akhila did not question her because she was suspicious and she needs to be more careful in the house now. Mithra reveals that the pen drive that she left in Akhila’s room has all the proof of her relationship with Nandini and family. Nandini asks her to get the pen drive back somehow.

At home, Mithra calls a maid and asks if she found any pen drive while she was cleaning Akhila’s room. She asks the maid to clean the room again and asks her to look for the pen drive and give it to her. The maid obliges and looks for the pen drive but does not find it anywhere in the room. The pen drive is under the bed and she only pushes it further in by mistake. She tells Mithra later that she didn’t find it.

Mithra pays the maid some extra money and asks her to not tell anyone anything. But the maid confides in Parvathy about everything. Parvathy decides to tell Adithya everything once he is back. Later in the day, Vanaja comes back home from the hospital. Vanaja is upset with Mithra for not even visiting her at the hospital but Mithra lies to her about visiting her when she was asleep.

Vanaja and Mithra are catching up when Akhila walks in. Akhila asks her about her health and asks further questions. She also tells her that bad things happen to her since she has negative thoughts about everyone. Akhila leaves and Vanaja fumes over the free advice. Mithra tells Vanaja all about the pen drive after Akhila leaves. Mithra then realises that Parvathy must have eavesdropped on her conversation with Nandini. Mithra tells Vanaja that she has paid the maid to not tell anyone anything. Vanaja tells her that the maid will be more loyal to Parvathy than her. Vanaja assures her that they will make sure Parvathy doesn’t find the pen drive.

In the evening, Adithya comes home and asks Parvathy to get pudina tea to his room. Adithya notices that Parvathy is lost in thoughts. He asks her what happened as she is wondering what he got for her from Hyderabad. He tells her that he couldn’t find the time to go shopping for her. She asks him to get ready and come for dinner. He calls her back and gives her a saree that he bought for her. She is happy with the gift. He asks about Mithra and she tells her everything that happened.