Akhilandeshwari tries to kill herself with a gun but Adi manages to save his mother. 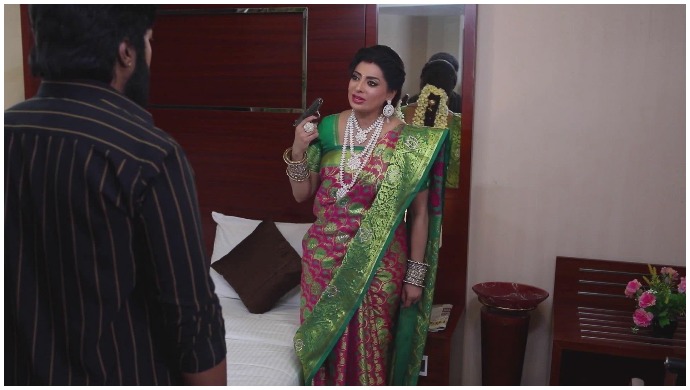 In the previous episode of Sembaruthi, we see Adi revealing the truth about his marriage to his mother. Akilandeshwari, who had enough revelations for the day already, did not see this coming. She was taken aback when Adi told her that he is already married to Parvathy. While Akhilandeshwari had a dream wedding planned for her son, Adi destroying her dream like this was unacceptable for her. Though Adi tries to convince her, she gives him an ultimatum that he needs to choose between his mother and wife.

In tonight’s episode, Adi, who is given a choice to choose between his mother and wife, tell his mother that he cannot leave Parvathy as that would only question his upbringing. He explains to his mother that Parvathy has dedicated her life to him and now, has no one to go to. Hence, he can’t leave her. Akhilandeshwari is upset with the fact that his son chooses his wife over her and so, she decides to end her life. She locks herself in a room and tries to kill herself with a gun. However, Adi manages to break open the window and stop his mother from shooting herself and saves her. Meanwhile, Parvathy, who feels responsible for all the drama happening in the house, falls sick due to stress and faints. Adi and everyone else rushes her to the hospital immediately.

If you are new to the series, here are some important details you should know about. Adithya, the heir to a rich family, is secretly married to Parvathy, his household cook. The biggest obstacle to their happiness is Adithya’s mom, the strict and demanding Akhilandeshwari, who has different notions of what her daughter-in-law should be like. She has no idea about her son’s marriage, and Adithya and Parvathy are waiting for the right moment to tell her. Meanwhile, Akhila’s plans to get Adi married to Mithra fails as she learns about her identity. Will Adi and Parvathy finally tell Akhila the truth?

What do you think about tonight’s episode? Let us know in the comment section below. Also, watch Tamil shows and films on ZEE5. Stay tuned to this space for more updates.