Vanaja steals the Adhikadavur ancestral chain from Sundaram's house to embarrass him and his daughter, Parvathy. 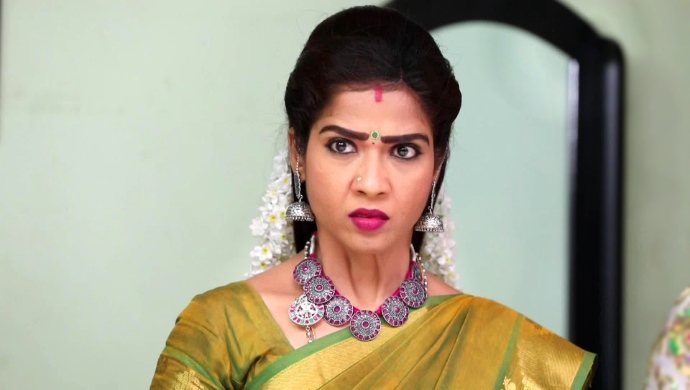 Adithya and Parvathy may soon land in trouble if Vanaja succeeds in her plan. In today’s episode, Vanaja will steal the Adhikadavur ancestral chain from Sundram’s house. And after she hands it over to Mithra, Uma will wish to see what’s inside the dollar. Mithra will open the dollar and find Adithya and Parvathy’s pics inside it. Now, will Mithra and Vanaja produce it as evidence to prove Adithya has an affair with Parvathy?

For the unversed, Akhilandeshwari, who doesn’t believe in taking gifted presents back, asks Sundaram to return the Adhikadavur ancestral chain. And in exchange, she asks him to take dozens of gold jewellery set displayed on the table. Sundaram politely refuses to accept any of her offerings and immediately agrees to give her chain back. But Vanaja purposely stops him from returning the chain stating that the priceless piece of jewellery must not return home during Rahu Kalam. So she asks Akhilandeshwari to wait until Rahu Kalam gets over. Thus, she buys time to hatch a plan against Sundaram and Parvathy.

Did You Know? Karthik Prabhu Of Sathya And Sembaruthi's Adithya Are Friends