Vanaja goes to meet Nandhini and tells her the truth about the astrologer's prediction, they both make plans to kill Akhilandeshwari. 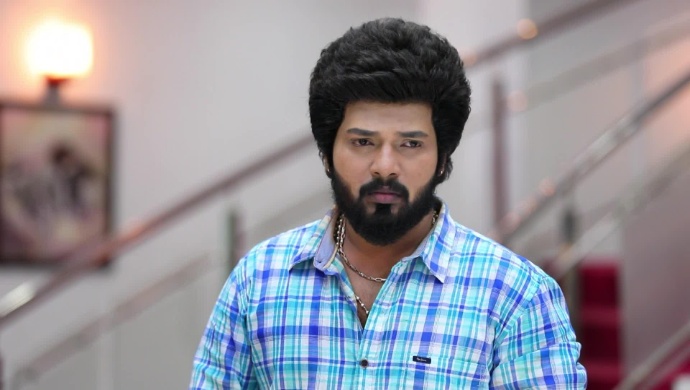 In the last episode of Sembaruthi, Nandhini is worried about the events that happened at Akhilandeshwari’s house, so she calls up Vanaja. Vanaja narrates to her how she tried to instigate Akhilandeshwari against Parvathy but she failed at it. Incidentally, Nandhini tells Vanaja that she feels that something is amiss about the note that the astrologer gave. Meanwhile, Purushtoman meets Adithya and tells him that the note that astrologer gave is different and tells him that he had replaced the note with the one that he had written. When Adithya reads the actual note given by the astrologer he finds it to be true to what happened earlier.

In today’s episode, we see that Arun shares his concern about Aishwarya’s stand about Adithya and Parvathy’s marriage. Shyam, on the other hand, tries to console him and pacify his fears. In the meantime, we see that Vanaja and Mithra go to meet the astrologer. Vanaja tries to understand what the astrologer actually predicted in the note.

Vanaja and the others understand how the astrologer had predicted the truth. She further tries to understand the aspect of marriage between Adithya and Parvathy. Later, Vanaja asks the astrologer to predict something for her. So, the astrologer writes something on a note and hands it over to her and says that she should open the note only after two weeks.

Later, Vanaja and Mithra make plans to save their skin from Akhilandeshwari’s wrath. Incidentally, Vanaja asks Uma to open the note that the astrologer gave her and read it out. When Uma reads it out Vanaja and Mithra are left confused and they are not able to grasp its meaning. After that, Vanaja goes to meet Nandhini and tells her the truth about the astrologer’s prediction, they both make plans to kill Akhilandeshwari.

Meanwhile, Adithya and Shyam meet up and they make a plan for Adithya and Parvathy’s outing. Suddenly, Adithya receives a call from Purushotaman and he rushes to the hospital with Shyam. We see that Adithya enters the ICU and sees that there are a lot of doctors, in a glimpse we see that Parvathy is lying on the bed with an oxygen tube and ECG monitor attached to her body. It seems that she is in danger.

So, what do you think might have happened? How did Akhilandeshwari survive and Parvathy get hospitalised?

Sembaruthi 20 May 2019 Preview: Parvathy Rushed To The Hospital?

Saif Ali Khan Is The New Shyam On Sembaruthi