This is what happened in tonight's episode of Sembaruthi. 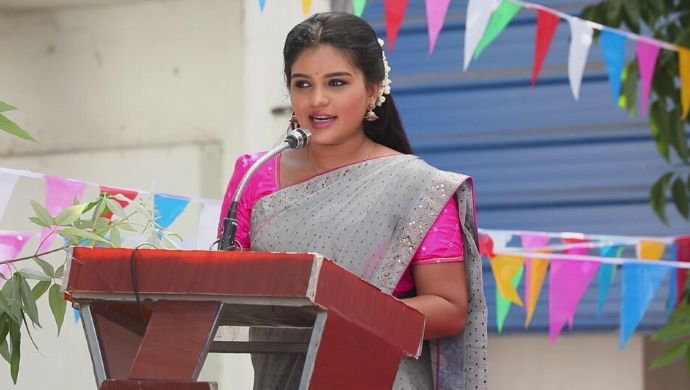 In the previous episode, Parvathy leaves everyone shocked after she enters the office to enrol herself as a candidate for the Goodwill Ambassador elections. Of course, she gets a good scolding from Akhilandeshwari for changing her decision but Adithya takes the bullet for her. He also manages to find some clues that will help him expose Nandini and Mithra. Meanwhile, Vanaja and Mithra try to instigate Aishwarya against Parvathy.

Aishwarya tells Vanaja and Mithra that she is not going to go against Parvathy. She also makes it very clear to them that she will, along with Arun, only try to get Parvathy to win. At the elections, Mithra begins to speak in English leaving everyone confused. Vanaja is also worried and goes to tell her that no one would understand English over there. She asks her to speak in Tamil instead. Mithra then adds that she was asked to speak in Tamil since no one would understand English. Apart from condescending Parvathy in her speech, she also asks the workers to learn English so they speak to her properly.

On the other hand, Parvathy starts her speech by praising Akhila and how she strives to make everyone’s lives better. The workers are able to connect with her better. Parvathy’s heartwarming speech leaves a smile on everyone’s faces. Adithya taunts Akhila before leaving with Parvathy. At home, Vanaja asks Mithra to get to know the workers on a personal level and have meals with them but Mithra cringes. Vanaja forces her to do so anyway if she wants to win the elections.

Adithya goes to the first address mentioned in the letter that Ashok gave him but finds that the person mentioned in the letter does not live there. He is puzzled. Meanwhile, Mithra and Vanaja go to the factory to get to know the workers and find out that while they trust Akhila’s choice completely, they are conflicted now after Parvathy’s speech. But Vanaja and Mithra try to convince them. Just then, Adithya also reaches the factory.

World Television Day 2019: 10 All Time Favourite Couples On Telly From The Last 5 Years