Mithra's plan to insult Parvathy fails, as she gets reprimanded by Adi and slapped by Akhila, for jeopardising the company's name. 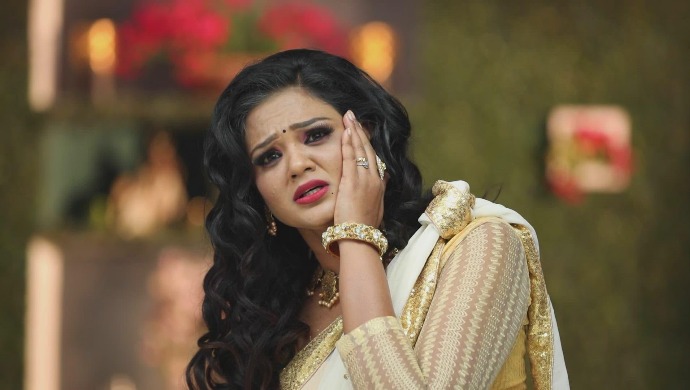 In the previous episode, after Akhila fires Sundaram, he feels guilty and assumes that she knows about Parvathy and Adi. He is about to reveal everything to her when she stops him from saying anything. Akhila states she can finally see her loyal Sundaram again and doesn’t need to prove himself. Vanaja is upset with her for not letting Sundaram speak the truth. He thinks she has forgiven him, despite knowing the truth. Hence, he forces Parvathy to do the same. Adi arrives at their place and talks him out of this plan. He states that Akhila does not know anything except for that Adi loves Parvathy.

Tonight, Adi is furious as he holds a vase in his hand and walks up to Mithra and Vanaja. He points the vase at her face but instead of throwing it at her, Adi smashes the vase on the floor. Akhila and Purushottam notice this from the top floor and immediately rush downstairs. She states that his behaviour is unacceptable, as he is about to marry Mithra. However, Adi turns to her and tells her about the whole incident in the office with Parvathy. He then adds that her stupid stunt almost cost them big deals, all because she wanted to humiliate Parvathy. He walks away and Mithra tries to get some support from Akhila. However, she too slaps her and tells her to stop with the madness surrounding Parvathy. Vanaja and Mithra are both shocked but they decide to keep mum for the time being.

Parvathy is still showing no interest in learning English as she despises the language. Even after Ganesha tries to coax her into studying, she ends up sleeping on the chair with the book, in her hand. Adi suggests that Ganesha scare her, so that she won’t sleep. He does as told. She blames Adi for being so lenient with Ganesha and allowing him to indulge in such tricks. However, Adi explains that he wants her to study and work hard towards learning new things. Purushottam and Arun visit the family Guruji and ask him, to convince Akhila, to change Adi and Mithra’s wedding date.

Next day, Guruji comes over and his presence makes Vanaja uncomfortable. The minute she sees him, Vanaja is sure that he is going to say something that will affect her plan. Akhila informs him that she has decided to get Adi and Mithra married on his birthday. He starts talking in code words, which confuses everyone. Akhila asks him to be more articulate about what he is trying to convey. To this, he finally states that he thinks she shouldn’t be hasty about Adi and Mithra’s wedding. In fact, he states that she should figure out a better day and then fix the wedding.

How Does Vijay Sethupathi Fare As A Mafia Don Linga And Ranga In Junga? Watch It On ZEE5