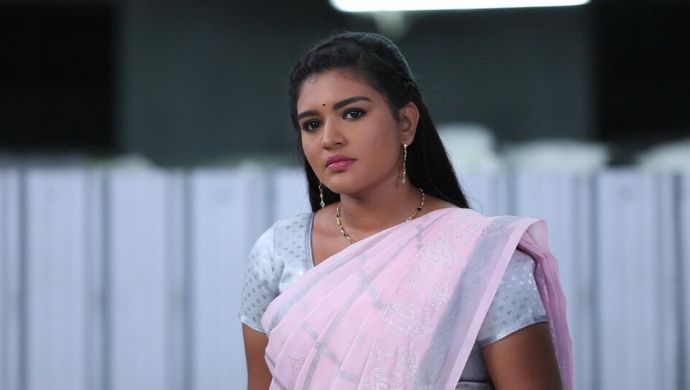 In the previous episode, Parvathy wins everyone over with her speech at the elections whereas Mithra condescends everyone including Parvathy. Vanaja, in her attempt, to paint a pretty picture of Mithra and get her to win the elections, comes up with a plan but Mithra is hesitant about it. Adithya gathers more clues against Mithra and Nandini.

While Mithra has no problem in trying to get to know the workers, she finds it beneath her to eat with them. They go to the factory and Vanaja tries her best to talk Mithra up. Mithra also pleads with the workers to vote for her since she has been appointed by Akhilandeshwari herself. Vanaja and Mithra then find a couple of women workers eating and go to chat with them.

To prove that Mithra is grounded and one of them, Vanaja even sweetly forces Mithra to eat a certain sambhar rice from one of the women’s dabba. But Mithra throws it away after one morsel and even insults the workers. Vanaja somehow makes an excuse and they leave from there.

Later on, Parvathy also comes to the factory to meet the workers and instantly bonds with them. The workers unanimously decide to vote for her since they find her personality very appealing and nice. Parvathy also helps a worker who faints because of low blood sugar and tells him that he needs to take of his health to work properly.

Meanwhile, at home, Mithra gets a call from her blackmailer and he asks her to get Rs 50 lakhs for him to stop him from exposing her. She agrees to pay the money and immediately calls Nandini who asks her to go fearlessly and that she will take care of the rest.

Mithra drops the bag of cash near a dustbin as ordered and leaves. But the masked blackmailer gets attacked by Nandini’s goons and even gets shot on the calf.